At DC immigration rally, Traci Blackmon calls on people of faith to live by moral law of love 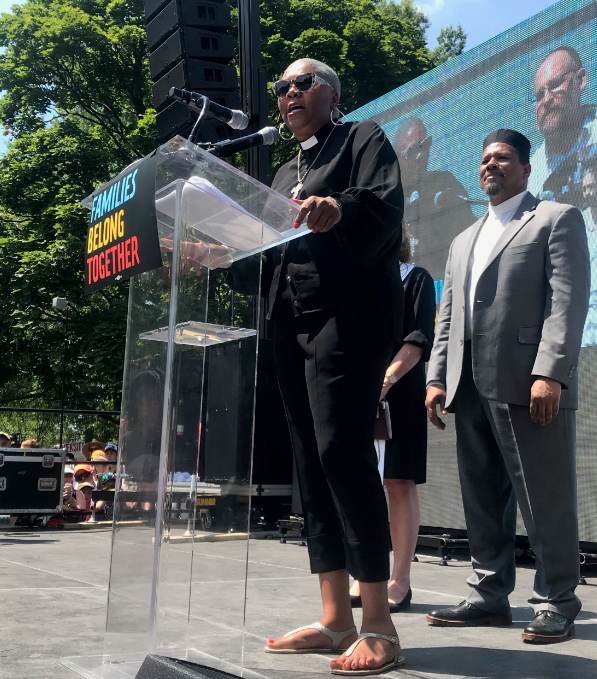 In large cities and little towns around the country on Saturday, Americans from all walks of life took to the streets and the public squares to say "Families Belong Together," calling for the immediate reunion of migrant children and parents separated by the government immigration policies.

The Rev. Traci Blackmon brought greetings from the United Church of Christ to a crowd of 30,000 people gathered at Lafayette Square across from the White House, site of the main rally in Washington, D.C. The Executive Minister of Justice & Local Church Ministries urged the crowd to stop history from repeating itself, by fighting for love.

Here is the text of her statement.

I've come to remind us this morning, we've been here before. I know it feels brand new, but it's not.

And here we are again. Declaring ourselves to be "one nation under God" and yet, daring to curse that which God has blessed.

God is God of the whole world. God cares for all of creation.

Who is this God whose name we declare as we legislate evil in God's name?

I am reminded of the warning of the prophet Isaiah who declares in the 1st Testament:
Woe to those who make unjust laws,
to those who issue oppressive decrees,
to deprive the poor of their rights
and withhold justice from the oppressed of my people,
making widows their prey and robbing the fatherless. (Isaiah 10)

What we are witnessing at our borders with black and brown families today is not who America has become. This is who America has always been. This has been this nation's response whenever it's false god of whiteness is threatened.

This too is our story.

America snatched Indigenous children from their families and their land.
In the name of God.

America snatched enslaved children from their families for subjugation and control. In the name of God.

America snatched Japanese American children from their families fueled by fabricated fear. In the name of God.

America snatched a quarter of a million predominantly black and brown children from parents who are caged in a prison industrial complex that is too profitable for the few to be re-evaluated for the sake of the many. In the name of God.

America snatched over 30,000 children and caged them in juvenile detention centers where we would rather incarcerate them than educate them. In the name of God.

This not as much about safe immigration policy as it is about separatist ideology.

And people of faith must not be silent in the face of a god we do not serve.
OUR SILENCE WILL NOT SAVE US!

The legislation of evil does not make it holy.

Our Supreme Court is wrong on this one.
And the Court has been wrong before.

In 1857, the Court was wrong when they ruled against freedom in Dred Scott vs. Sanford.

In 1883, the Court was wrong when they ruled to uphold anti-miscegenation laws in Pace vs. Alabama.

In 1896, the Court was wrong when they ruled to uphold separate but equal legislation in Plessy vs. Ferguson.

In 1944, the Court was wrong when they decided the alleviation of white American fear outweighed the civil liberties of Japanese Americans in Korematsu vs. America.

And just as all those other wrong, racist, decisions have been overturned, this one will be as well.

Because there is a higher judge than the Supreme Court. A higher law not made by man. A moral law by which all people of faith must live.

And that law is LOVE!

And now abide faith, hope, love, these three; but the greatest of these is love.

History shows us, we've been this way before. And history tells us — LOVE WILL WIN!

Keep fighting my friends.
WE STAND ON THE SIDE OF LOVE!