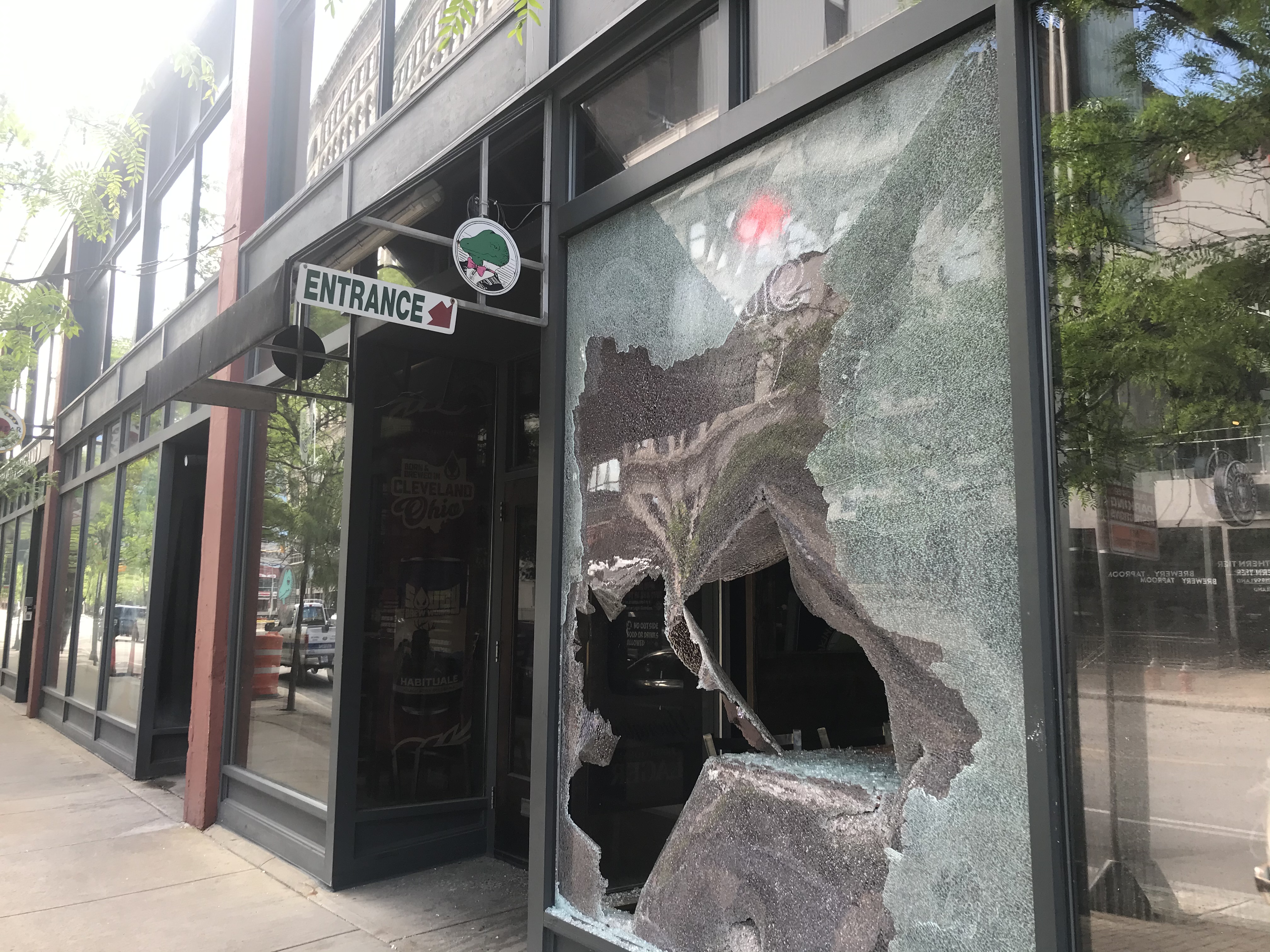 Around the United States on Saturday, peaceful protests calling for justice in response to the death of George Floyd morphed into violent demonstrations against police in several cities, with rioters setting fires, looting businesses and destroying property in central business districts. In Cleveland, home to the United Church of Christ National Setting, the chaos prompted the mayor to declare a state of civil emergency, under curfew, as law enforcement and national guard worked to restore order.

On May 31, Pentecost Sunday morning, the UCC Church House was only one of two buildings in its neighborhood that stood unscathed.

As Clevelanders came together to clear the wreckage, General Minister and President John Dorhauer ventured downtown, and was waved past police barricades so he could check on 700 Prospect. 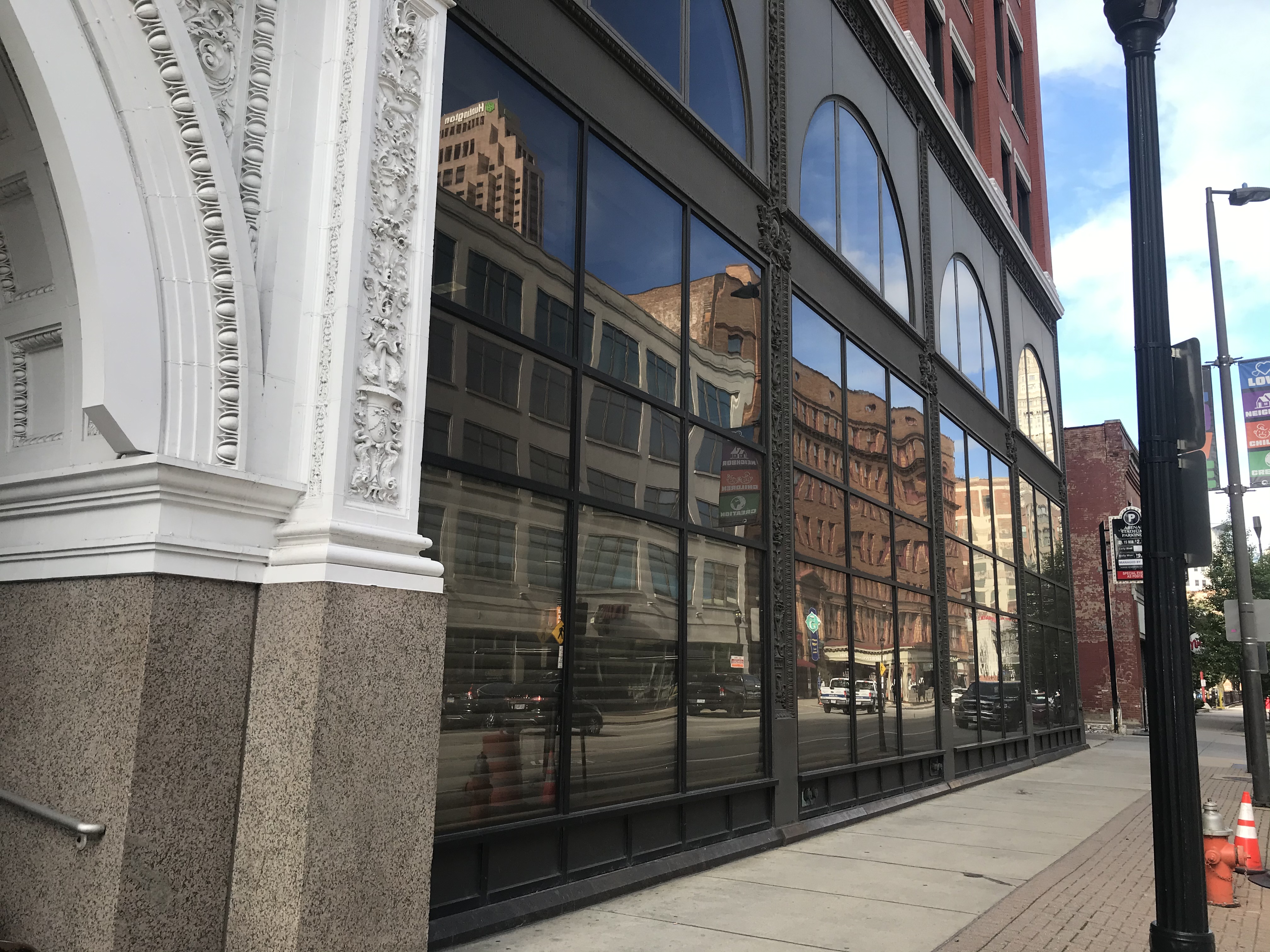 “Once I drove onto Prospect, you could see the damage. Every building was busted into. Broken glass covered most of the sidewalks. I could see volunteers with brooms and garbage bins cleaning up. I expected the worst at this point,” he said, noting that the front of the Church House has huge plate glass windows. But as he drove by the front of the building, he was stunned and relieved to see no damage. After parking his car to do a more thorough check, he passed vandalized restaurants. “I could see when I got out that not only were the windows broken, they had gone in and taken what they could and upturned or destroyed what was left behind. I saw no signs of fire. I walked the entire length of our building, front and side. There wasn't a scratch anywhere. I have no idea why, but we were exempted. But I also played back in my mind the (officer’s) warning: ‘They will be back around noon.’ If we have another night of this, I am not sure what tomorrow will bring. 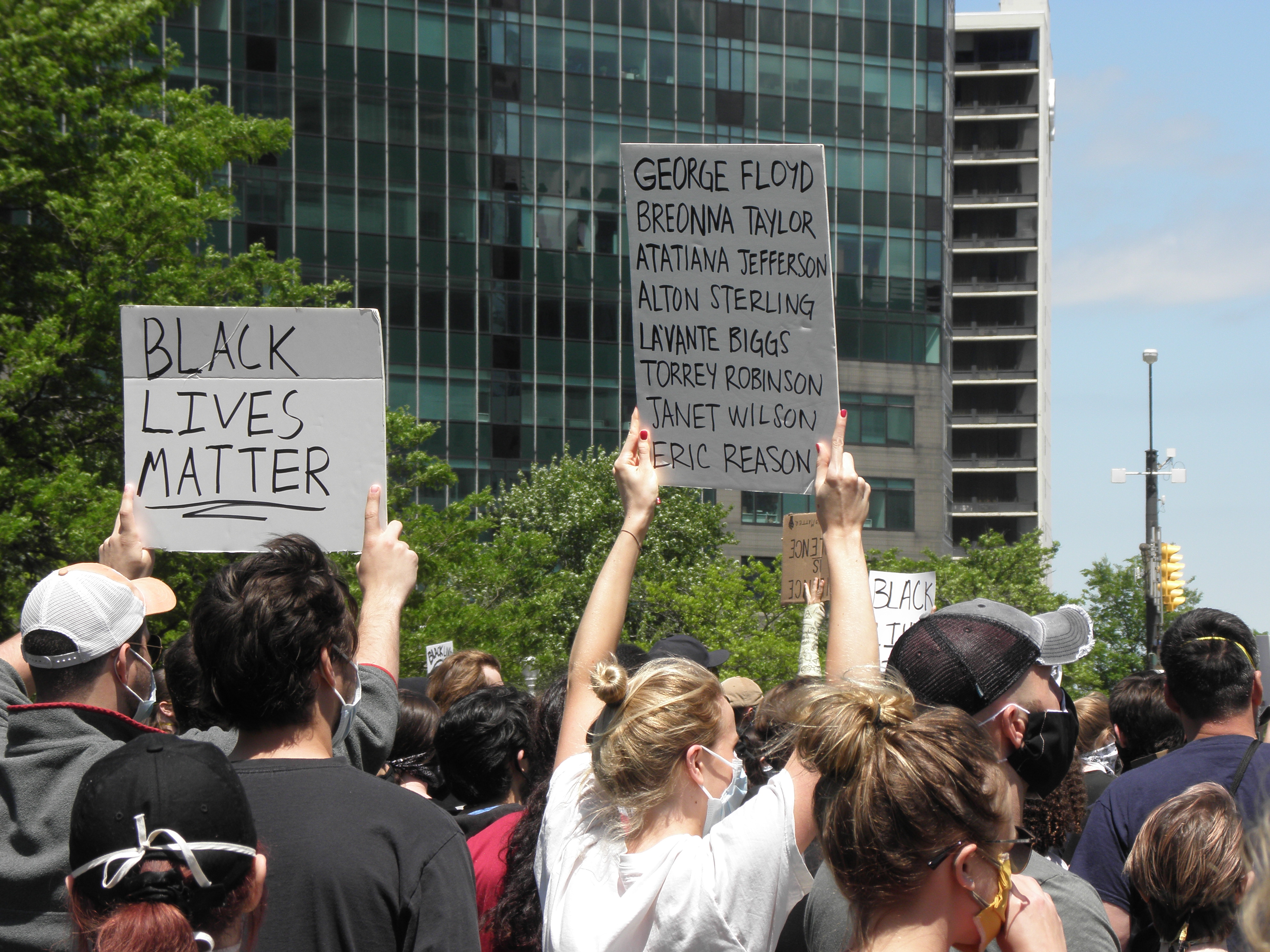 “As a leader of a denomination intent on justice and outraged by what happened to George Floyd, I stand in solidarity with the voices of protest angry at a police force that will not rid its ranks of those who profile by race – at times with deadly consequences. We are right to demonstrate that anger and outrage,” Dorhauer said. “I was on a call Friday night with SURJ (Stand  Up for Racial Justice) – the sponsors of Cleveland's protest rally. They coached us through peaceful protest techniques and de-escalation strategies. That was their clear intent.”

Dorhauer, who was present at the Saturday gathering, said thousands of people first gathered at a park by the “Free Stamp” sculpture, many wearing masks and most carrying Black Lives Matter signs.

His colleague Hans Holznagel said the group was “totally peaceful, though anger was clearly present. Social distancing was not being observed at the center of the gathering, so I didn’t try to wade in and hear what was being said. 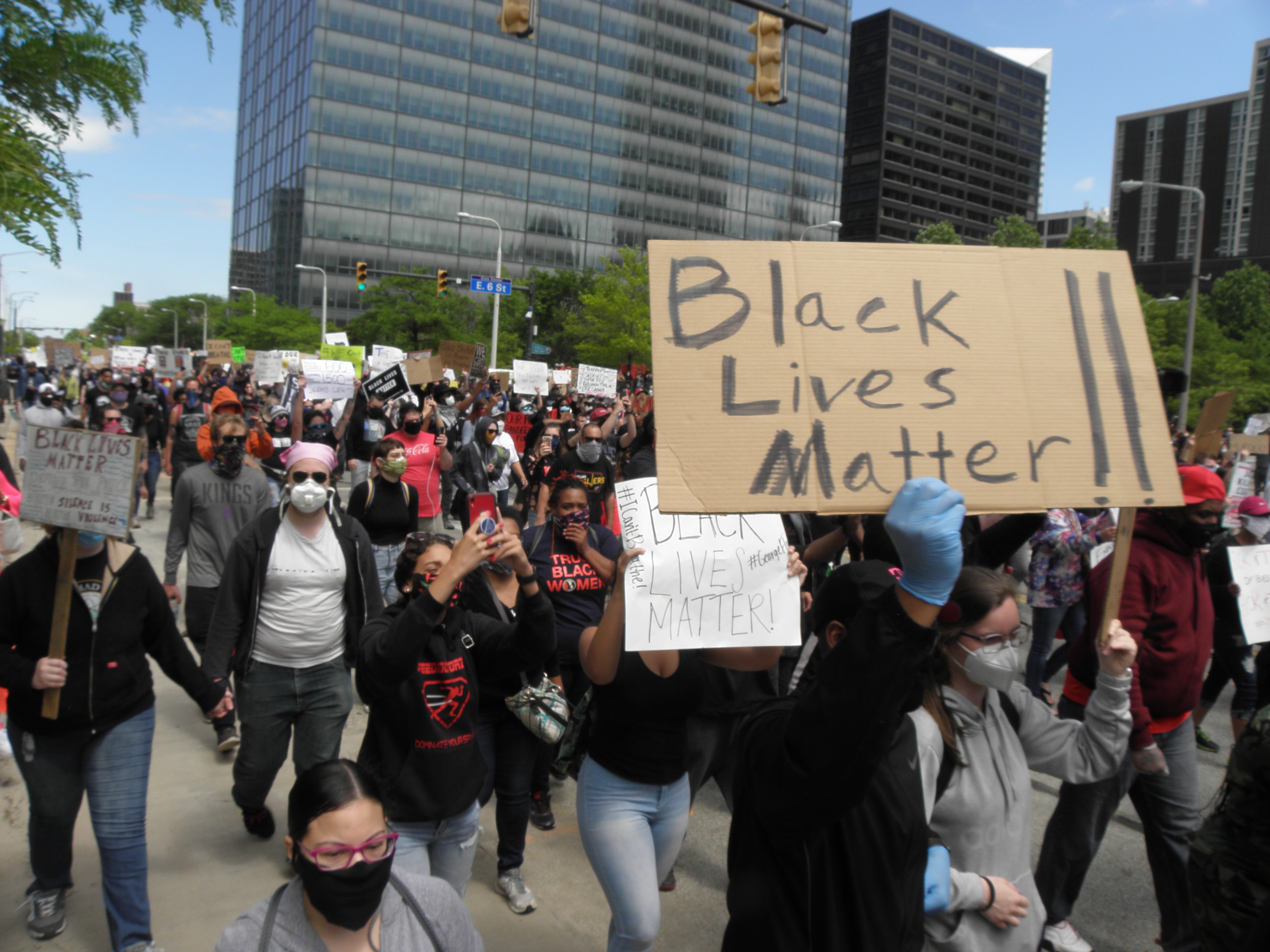 “Personally, I found it extremely powerful to be among thousands of people of many ages and races who had turned out to honor George Floyd and so many other Black people who have died at the hands of white vigilantes or police officers,” Holznagel, digital content specialist in the Office of Philantrophy, Technology, Identity and Communication, continued. “There is strength in numbers, in being in the presence of people chanting and crying out for justice.”

Dorhauer said that most of what he saw at the event was “smooth, well organized, temperate, peaceful, and friendly. Groups were organized to hand out free water and snacks. Families were there wit pets and children. Helicopters flew overhead. Police were circling on bikes, but exchanges with the protestors were friendly and cooperative.”

However, the UCC General Minister and President said he noticed evidence of outside agitators that caused him some alarm.

“Clearly, there were groups there yesterday NOT invited by the sponsors of the event who had other purposes in mind. I left before they would take over the event.”

Acronyms for the provocateurs Dorhauer later references were spray painted on the Cleveland Justice Center where tensions escalated between police and protesters. Local reporters said some people threw rocks and water bottles at officers as police used pepper spray and flash bang pellets on the crowd. Demonstrators set fire to a couple police cars and other vehicles on the street.

“What I saw on Facebook live yesterday, later on the news, and with my own eyes this morning — angered and saddened me,” he said. “The justice work we need to move forward in response to the George Floyd homicide was coopted by both radical and fringe left-wing and right-wing agitators who want something else.

“Alt-right leaders are trying to use this to create the false narrative about black rage — a trope all too often repeated by them and all too often believed by most whites. That really angers me. Left-wing anti-government groups like ANTIFA, ACAB, and others just want to overturn power — and at any cost. THAT is not what the death of George Floyd should be calling for —and the real message that the protestors want and need to make is likely going to be hidden as the story turns instead to the destruction of our cities. It will turn public outrage about George's abuse on its head and instead have the collective outrage mount against the protest movement. It sickens and saddens me —because it is a strategy that works.”

After the confrontation at the Justice Center, several groups moved south into the heart of the business and entertainment districts. Cleveland police made “multiple” arrests after the first curfew was imposed at 8 p.m. Saturday. Cleveland Mayor Frank Jackson said in a statement that the protests turned into “outright lawlessness.” The city remains under curfew until Tuesday at 8 p.m.

“This violent unlawful behavior completely overshadows the purpose of the demonstrations and those in whose honor they are held,” Jackson noted in his statement. “This criminal activity will also not be tolerated.”

The UCC Officers and senior staff have asked all National Setting employees not to come into the city or the building this week to be safe. As Clevelanders hope for a quiet night, Dorhauer plans to go back to check on the Church House Monday morning.

“I have no idea what we will find tomorrow. I hope and pray that if there is more to come today, our building survives another night.”