As election contention continues, churches pray for peace – and to persist for justice

Declared a winner by major news organizations, the challenger for president of the United States gave a victory speech on Saturday, Nov 7. The incumbent questioned that result and said his legal fight had just begun.

In response, United Church of Christ congregations and interfaith partners continued what they had been doing before and since Election Day, Nov. 3: offering nonpartisan prayers for peace, a healthy democracy, racial and social justice, and the healing of a divided nation.

In vigils, “prayer spaces” and worship services – online and in person – participants also gave thanks for the largest U.S. voter turnout in 120 years and for election officials still engaged in a longer-than-usual vote tabulation process, caused largely by increased voting by mail.

They raised prayers of concern over a resurgent COVID-19. And they lamented another national sickness, amplified in 2020 by the pandemic and the election campaign: white supremacy, and the burdens and violent deaths it has long visited upon people of color, especially Black people.

Saturday may have been the climax in the electoral contest between the incumbent ticket of President Donald Trump and Vice President Mike Pence and their challengers, Joe Biden and Kamala Harris. But it was not yet the end.

The vote margin was close enough in one state, Georgia, to cause a recount. And since the election, the Trump campaign has filed multiple lawsuits in five states, alleging election irregularities. By Monday, courts had already dismissed several of those suits for lack of evidence, and Biden, embracing the role of president-elect, had begun naming his transition team, including a 13-member advisory board of doctors and scientists to guide his administration in its COVID-19 response.

Members of Douglas (Mich.) Congregational UCC were feeling the tension as soon as Nov. 3 was over, said their pastor, the Rev. Salvatore Sapienza. Their investment in the process had been visible. Throughout October, they had run a shuttle service for early voters in their county. On Election Day, three of them had served as poll workers. “One of our church members let me know that she sat outside her local polling place, silently offering prayer to those standing in line,” he said.

With early results too close to call, “several congregants have called me, struggling to find hope and asking how we can heal a country so divided,” Sapienza said on Wednesday. “We are gathering together on Zoom tonight for a time of centering prayer together.”

By Sunday, he was addressing the election in his sermon. “We have gotten to see very clearly how our nation is so deeply divided,” Sapienza said. Referring to a biblical parable about oil lamps, he asked, “How do we become bearers of the light during this time of great division in our country? Well, Jesus gave us the instructions. He said that we are the light, and that we are to love our neighbor, to bless our enemies, to care for the poor, to heal the sick, to welcome the stranger, to fight for the powerless and to lift up the lowly. When we do those things, we bring light and healing to the world.”

‘To find peace in a tumultuous time’ 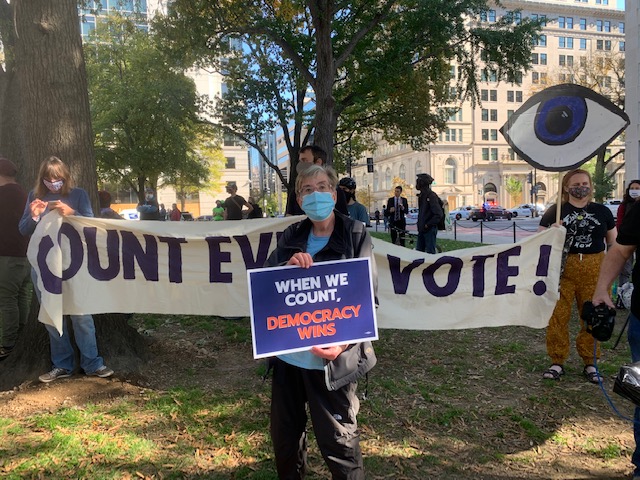 Some of that same spirit came through in a Friday rally in Washington, D.C., organized by advocates for environmental, racial and health-care justice. It touched on “the long list of challenging policy issues before our country and world,” said Sandy Sorensen (seen in center photo at right), director of the UCC’s Capitol Hill advocacy office.

The D.C. rally was also a celebration of voice and vote. “Making sure that every single person’s vote is counted is holy work,” said the Rev. Kaeley McEvoy (seen in top photo), who lives in the city and serves as associate minister of Westmoreland Congregational UCC in nearby Bethedsa, Md.

“The only expectation I had this week was that God would be with the people – not with our institutions, or with the election results – but that God would be in the communal breath that happens when people come together to mourn, to celebrate, to pray, to protest,” McEvoy said. “I felt that communal magic dancing among Go-Go music and protesters of all ages, races and genders today.”

Across the UCC, some local churches also created local space, virtually or in person.

In Manhattan, Kansas, First Congregational UCC helped organize an outdoor “Post-Election Interfaith Weekly Prayer Vigil” series. “This will not be a partisan or policy-oriented event,” said a notice on Facebook. “It is solely an opportunity for people to bring their hopes and prayers for our nation. Even as we may have different faith practices or political beliefs, we can be united in our desire for our nation to find peace in a tumultuous time.” 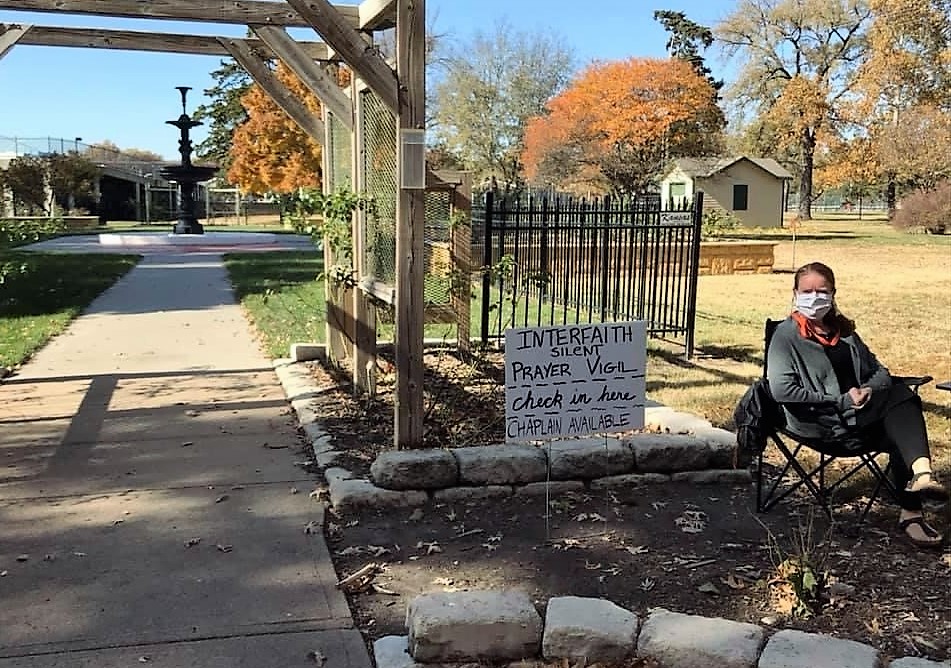 The first, held Thursday, Nov. 5, “was completely silent,” said the Rev. Caela Simmons Wood (seated in picture at right), pastor of First Congregational. “People prayed in the rose garden in our city park. It was a gorgeous fall day. Some people sat. Others did yoga or walking meditations and prayers. We have participants and planners who are Christian, Unitarian Universalist, Jewish and Bahai.” How many vigils there will be is not yet known, she said. “We’ll take it week by week.”

‘It’s about more than one election’

In Seattle, University Congregational UCC scheduled the Nov. 6 slot in its lecture series – “All This Joy, All This Sorrow” – as a moment for people to check in. “On Friday night we paused and took a breath together,” said the Rev. Catherine Foote, the church’s minister of care and outreach. “We still did not know how things would turn out that night.”

She said the evening included “a recognition, as we have said all along, that the hard work of responding to God’s call to love and justice continues.” University Church has long been outspoken on what it sees as the work of Jesus in society, she said, including “common good” actions such as support for access to health care, immigrant rights, care for the planet, the Black Lives Matter movement, an end to gun violence and an end to police violence.

But she also heard sentiments raised, such as, “it’s about more than one election or one person,” and, while “the Bible is political, at the same time God is not partisan, and the nationalization of any religion is deadly.”

“We named that our hope is not based on a particular outcome of one particular election, but the deep hope, beyond our seeing, that nothing separates us from God’s love,” Foote said.

‘Sacred work of honoring one another’

The connections between spirituality and political activism were also clear on Friday as Faithful Democracy, a coalition of some 70 churches and faith-based organizations – including the UCC – closed its “Sacred Season of Voting” with a prayer vigil. It was recorded and can be viewed here, on Facebook. In remarks and prayers, more than a dozen speakers touched on work to be done whatever the election’s outcome – ranging from fighting gerrymandering and ensuring voting rights to opposing policy brutality, racism and disparities in health care and education. 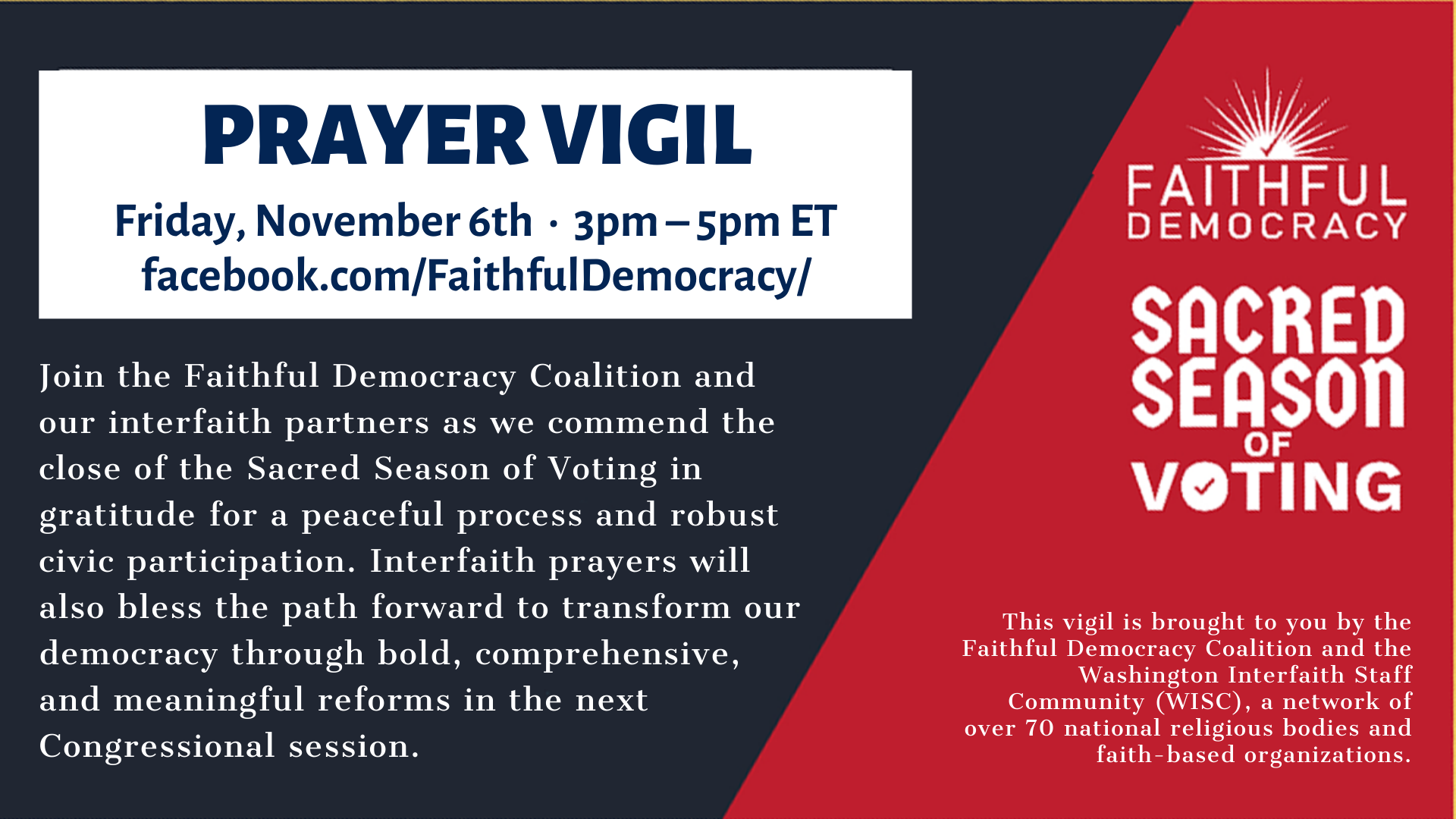 “God does not change a condition of a people until they change what is within themselves,” said Maggie Siddiqi, director of the Faith and Progressive Policy Initiative at the Center for American Progress, quoting from the Koran. Creating a just democracy where all voices are heard is “a spiritual journey as much as it is a practical one,” she said, and people of faith should remain committed to ensuring everyone’s vote is counted. “If we stay committed to this sacred work of honoring one another, then I believe our God will change us because we are changing ourselves.”

The in-person Friday vigil in the nation’s capital also picked up that theme of mutual engagement for the common good.

“Speakers talked about the rising spread of COVID-19 and its disproportionate impact on communities of color and frontline services workers, the need to go deeper in addressing racism and racial justice, the now very real and devastating impact of climate change and many others,” Sorensen said.

“It really was not a partisan celebration of election outcomes, but rather a reaffirmation of the power of engaged voters and the need to move forward with a clear sense that our well-being is wrapped up in the well-being of everyone else. There is a lot of work to do, and we are the ones we have been waiting for.”