A string of fires has caused millions of dollars in damage to a trio of churches in the Pacific Northwest, and fire investigators in Vancouver, Wash., believe that a serial arsonist targeted the three buildings and set them ablaze.

First Congregational United Church of Christ was the first hit and sustained the most damage of the three churches burned in the last week, with losses estimated at $2 million. Despite the news, the congregation aims to press forward and make the best of the difficult circumstances.

"We may have been burned down, but we are not burned out," interim pastor the Rev. Jennifer Brownell said at Sunday worship service held under a tent. "Our church is the people, not the building. We're not afraid."

Kenneth Rowe, who just completed a term as the church's moderator, said the congregation is "still cleaning office equipment, supplies, choir robes and much more. We are meeting daily with the restoration company."

The First Congregational community plans to worship in the labyrinth outside its building for the next two Sundays, and then will use space at Kol Ami Jewish Synagogue until the end of August. "We will start searching for space immediately for probably the rest of the year," Rowe said. "We aren't expecting to be in the building until after the first of year."

The fire crews that arrived at First Congregational after an early morning call on May 25 were able to contain the flames to one end of the sanctuary, and saved the church's cross and steeple. There were no injuries. Investigators think the fire started on the exterior of the building, spread inside and destroyed historic stained glass in the center of the church's iconic, arcing roof line that resembles the vessel from the Book of Genesis built by Noah to survive a great flood.

"When I pulled into parking lot, there were two fire trucks already there and smoke coming from around the eaves and the west spire," Rowe said. "At that point I was shocked and hoping that they could knock it down quickly. After a half hour, when flames burst through the skylights, I realized this was going to change the way we did things. I thought about the members who had contributed to the capital campaign to get the roof and skylights replaced." 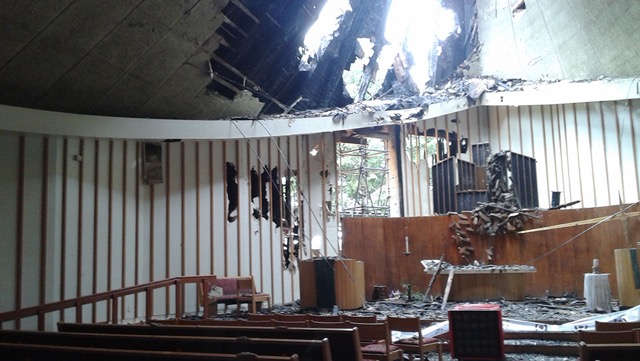 First Congregational, which is 125 years old, also served as a gathering space for many organizations in Southwest Washington, including health groups, environmental groups, music groups, other faith communities and two homeless families that sought shelter on the property. As Kristina Martin, youth coordinator at First Congregational, wrote in a blog, "We are all homeless and adrift right now… Some of those organizations have lost everything. Some have lost only scheduled events and meetings. All will need to find new homes."

The question the congregation and investigators cannot yet answer is who set the fires, prompting law enforcement agencies in southwest Washington to form the Church Arsonist Task Force. The group, made up of the Clark County Fire Marshal's Office, the Clark County Sheriff's Department, Vancouver police and fire, and the Bureau of Alcohol, Tobacco, Firearms and Explosives is working together to process evidence and follow leads. 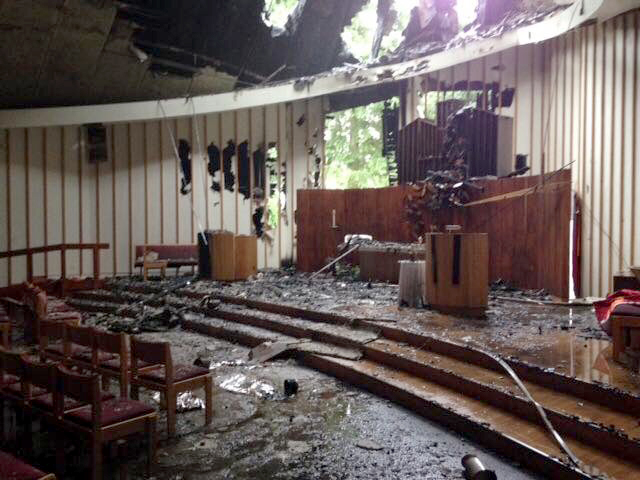 Clark County Fire Marshal Jon Dunway said they are treating all three fires "as if they're all connected," and that there are similarities among them — the buildings are all current or former churches, are near major roadways, all the fires broke out around 3 a.m. and were set intentionally.

The second fire was reported the morning of May 26 at Liberty Bible Church of the Nazarene. Although that church's sprinkler system extinguished the flames, there was extensive water damage inside the building. A third fire was reported on Sunday in a building that previously housed Bethesda Slavic Church, and was set to be converted to a treatment center. There was minor damage.

As for First Congregational, Rowe said that the church will "rebuild and be stronger for it. The congregation has been very supportive and offering help in any way possible."