A number of religious leaders and community activists put their bodies on the line in Washington, D.C., Wednesday afternoon to secure the futures of young people brought to this country as children.

Following a Nov. 1 interfaith rally on Capitol Hill urging Congress to pass a Clean Dream Act before year’s end, 15 participants, 11 of them clergy, were arrested for singing, praying and protesting in the rotunda of the Russell Senate Office Building. The activists were visibly trying to underscore the urgency of finding a legislative way of permanently protecting Deferred Action for Childhood Arrivals (DACA) recipients.

"We engaged in this action as a witness of justice, compassion and solidarity with our neighbors who are identified as DACA," said the Rev. Ken Heintzelman, pastor of Shadow Rock UCC, in Phoenix, Ariz., one of three UCC activists taken into custody. "Today they are the neighbor we love in this public forum."

"Our broken immigration system is doing irreparable harm to the fabric and soul of our nation. Separating children from their parents will not make America safer but it has made it cruel," said Caroline Theiss-Aird, past moderator of Pilgrim United of Church of Christ in Carlsbad, Calif., and another one of those arrested. "I am here on behalf of my young friend Liz, a DACA recipient from Oceanside who is currently studying law at Stanford and wonders what her future will hold now that the DACA program is ending. She has lived in the U.S. since age seven." 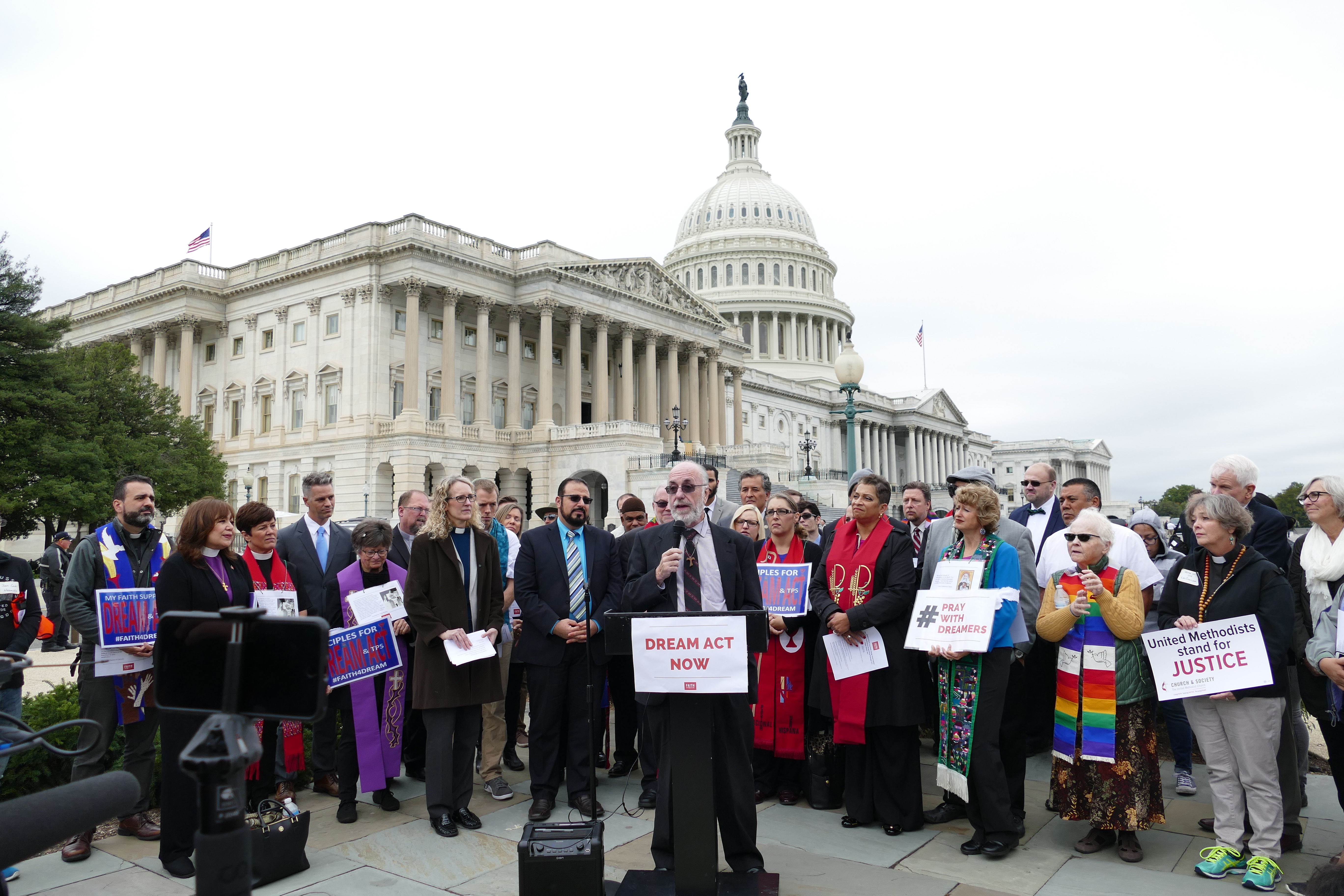 There are 800,000 young people like Liz who are facing deportation without a replacement for DACA, terminated by President Trump on Sept. 5. The final deadline to apply for any renewal was Oct. 5, and the program will start to phase out on March 5 if Congress does not come up with a fix.

Theiss-Aird, who lives in the San Diego area, said she came to D.C. to lobby her representatives for a 'clean' Dream Act, meaning no added enforcement or added detention centers that separate families.

"As a nation, we cannot ask these young people to put their parents at a greater risk of deportation in order to give themselves a path to legalization and eventual citizenship! San Diego residents know that we, along with other border regions in the U.S. are the safest cities in the country, that migration is at record lows and we want our tax dollars spent on education, healthcare and other services that benefit everyone." 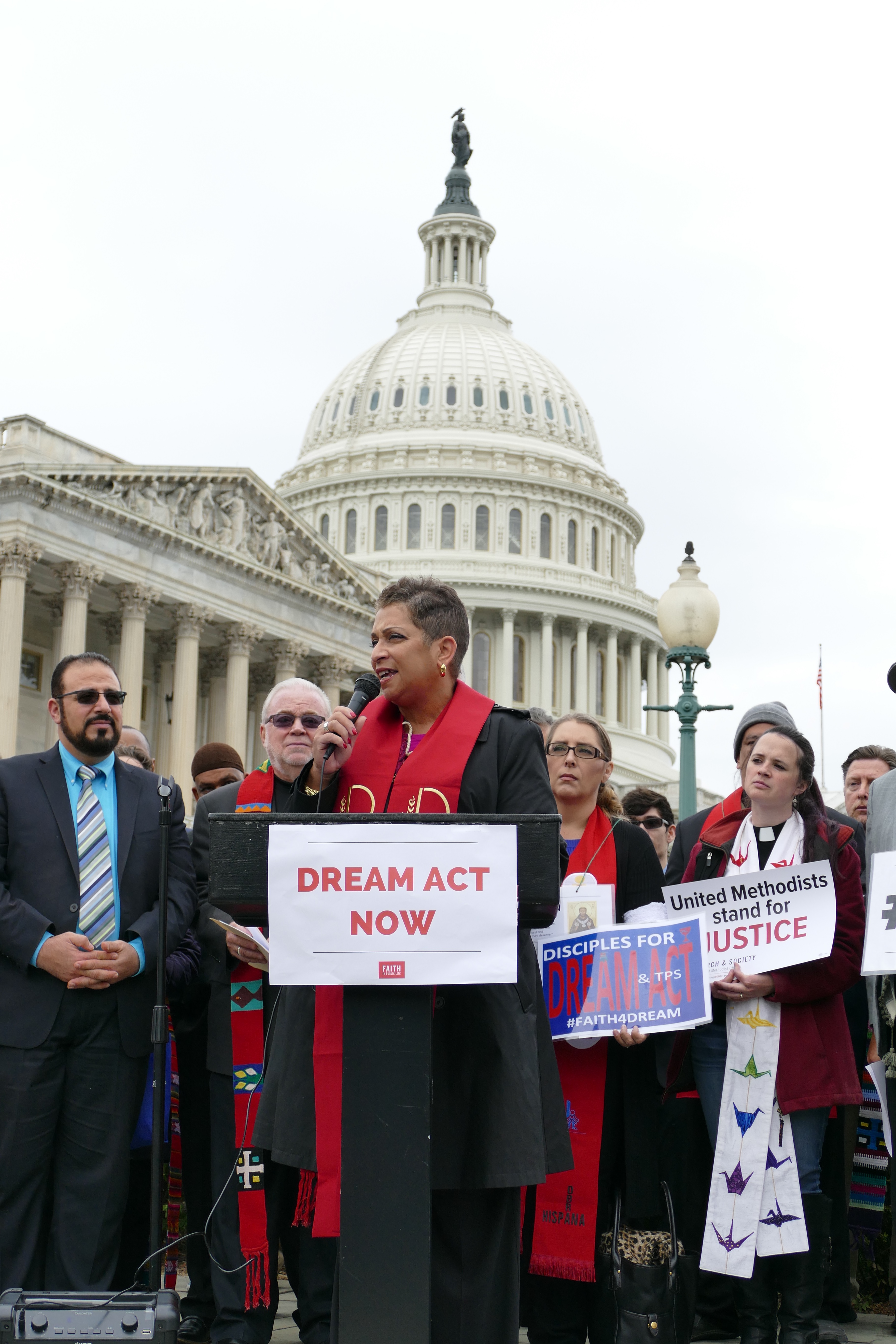 Shortly after President Trump moved to end DACA, the president met with Senate Minority Leader Charles Schumer and Congresswoman Nancy Pelosi to find a way to make DACA protections permanent. While the group reportedly reached an understanding to support the "Development, Relief, and Education for Alien Minors Act," better known as the DREAM Act, Trump then tried to tie his immigration policies to the bill. Now, the clock is ticking and if Congress doesn’t pass legislation by Dec. 8, scores of undocumented young people could be sent back to unfamiliar home countries. Action in 2018 will be too late.

"As a follower of Jesus, my sacred text speaks of being surrounded by a great cloud of witnesses who surround and strengthen our paths forward," said the Rev. Kate Shaner, minister of Mission at First Community Church in Columbus, Ohio. She was also arrested, "Standing in collective witness and solidarity with my immigrant/refugee brothers and sisters and my brothers and sisters of faith, as we seek God’s justice and shalom for all people."

"The faith community has been fighting for the Dream Act alongside undocumented youth for years," said the Rev. Noel Andersen, coordinator of the UCC Collaborative on Immigration, and national grassroots coordinator, Church World Service. "We have come to a place where we must escalate our action — which is why we gave testimony at in front of the Capital and 15 faith leaders prayed aloud in the halls of Congress calling on decision makers to pass a Dream Act now!"

"As a person of faith, I believe that 'welcoming the stranger' is at the core of Jesus’ message," Theiss-Aird emphasized. "There are many verses in the Old and New Testament that speak to this but here is one that applies today: 'You shall have the same rule for the sojourner and for the native, for I am the Lord your God.' There is no ambiguity there."