Risking arrest in D.C. for democracy 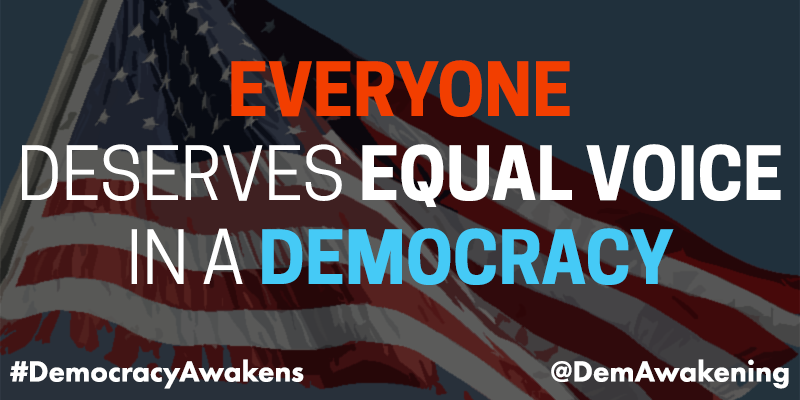 Leaders of the NAACP, AFL-CIO, Greenpeace USA, the United Church of Christ and several other organizations and faith communities are risking arrest Monday, April 18, in our nation's capital in what they have termed a "Congress of Conscience" to draw attention to problems with campaign financing and voting laws.

Demanding democracy reforms, thousands of people are expected to march through Washington, D.C., and gather outside the Capitol Building as the culmination of "Democracy Awakening," a three-day mobilization and protest movement that is calling for voting rights reforms, campaign finance reforms and the filling of the U.S. Supreme Court vacancy.

"The Democracy Awakening will evidence very clearly the coupling of voting rights and money and politics advocacy into a singular, powerful, democracy movement," said Robert Weissman, president of Public Citizen, one of 260 organizations uniting in this call for government reform. "We're seeing the rise of a social movement that refuses to accept business as usual, refuses to accept conventional wisdom about what is possible and feasible, and is insisting on the change we need in order to have a functioning democracy."

The director of the UCC Washington, D.C., office, Sandy Sorensen –– who pointed out that "the United Church of Christ is deeply rooted in the struggle for voting rights across many generations" –– is participating in this call to action.

"Voting is often described as the heart of the democratic process," Sorensen said. "It is the most fundamental access point for individuals to have a voice in the public policy decision making that shapes our common life. If voting truly is at the heart of the democratic process, than we as a people are in critical condition. Rollbacks in voting rights are threatening our heart, a robust democracy with a vibrant marketplace of ideas that make us stronger."

The mobilization to restore voting rights started April 2, with Democracy Spring, a march from Philadelphia to Washington, D.C. On Monday, April 11, hundreds of people staged a demonstration on the steps of the U.S. Capitol, where 400 were arrested. Over the weekend, activists plan to participate in teach-ins, a march and a rally. The wave of civil disobedience expected on Monday, April 18, is seen as just the beginning of a larger "Congress of Conscience" movement.

"This is the moment where we are at a crisis point in our democracy," said Cornell William Brooks, president and CEO of the NAACP, who will risk arrest. "We enter the first presidential election in 50 years, a half-century, without the full protection of the Voting Rights Act. We have the votes of citizens suppressed and stolen before the election, the votes of legislators bought and sold after the election. It is a moment where we see voter ID laws erect barriers at the ballot box. It is a moment in our democracy where money is exercising a corrupting influence over our democracy. It is a moment that calls for us to stand up and to stand for our highest moral and constitutional values."

Representing 12 million working men and women, the "AFL-CIO is proud to be part of this democracy mobilization," said Tefere Gebre, the national trade union's executive vice president. "I'll be proud to personally risk arrest at Congress on Monday. We are determined to fight to restore democracy in our country, which has been taken away from us by the corrupting influence of unlimited corporate cash and the continuing restriction of rights of voters at the polling place. As an immigrant and a former [Ethiopian] refugee myself, I risked my life coming to this country, walking through a desert and becoming a citizen so I could participate in our democracy fully. It pains me to see the country I love restrict the rights of working people, poor people and people of color being shut out of the political process. That's not the land of the free and the home of the brave that we all believe in."

"I am a theologically conservative evangelical Biblicist, and that is why I am joining the 'Congress of Conscience' and risking arrest," said the Rev. William J. Barber II, North Carolina pastor and leader of the Moral Monday movement. "I don't know any other way to be that and not believe in progressive values, and to challenge and reject narrow moralism and the attempt in the public square to limit moral debate … and stand against voting rights, living wages, equal protection, and environmental justice and addressing poverty. We must challenge the way evangelicalism has been hijacked in the public square."

Organizers are calling upon citizens from across the United States to join this protest against the influence of money in politics and congressional inaction.

Annie Leonard, executive director of Greenpeace USA –– which declared Monday an activist holiday so D.C.-area employees could participate in the act of civil disobedience –– said her organization, the largest independent environmental organization in the world, takes no corporate donations and would like elected officials to do the same. "We increasingly see that having a functioning accountable democracy is a pre-condition for us to then have a functioning environment," she noted.

A 30-year environmental activist, Leonard said that while she has seen enormous progress on many fronts, right now the number one problem to combating climate change is the government. "The scientific data says the situation is getting worse," she said. "The level of change that we are accomplishing is not commensurate with the scale of the problem and the science right now. Whether we are working to stop toxic waste dumping, or deforestation, or overfishing, hazardous chemicals, or if we are working to promote solutions, the number one obstacle in all of this work is our broken democracy. Our democracy should be the best tool we have available to build a sustainable future, but we can't currently access it –– partly because it has been so hijacked by big money."

"Democracy Awakening" organizers are pushing for a series of legislative actions, including the passage of four bills aimed at reducing "the influence of money in politics" while seeking to "expand and protect voting rights."

"We have to be clear here," Brooks said. "It is not enough to speak about reform or post about reform or comment on the need for reform. Ultimately, we have stand up for reform, stand against injustice, to step forward and put ourselves at risk for arrest. That is the moment we are in."

My faith can lead me to do nothing else than engage in Monday's civil disobedience action to strengthen voting rights," Sorensen said. "I have no doubt we will be accompanied by an amazing cloud of witnesses. I am compelled to carry on that witness."