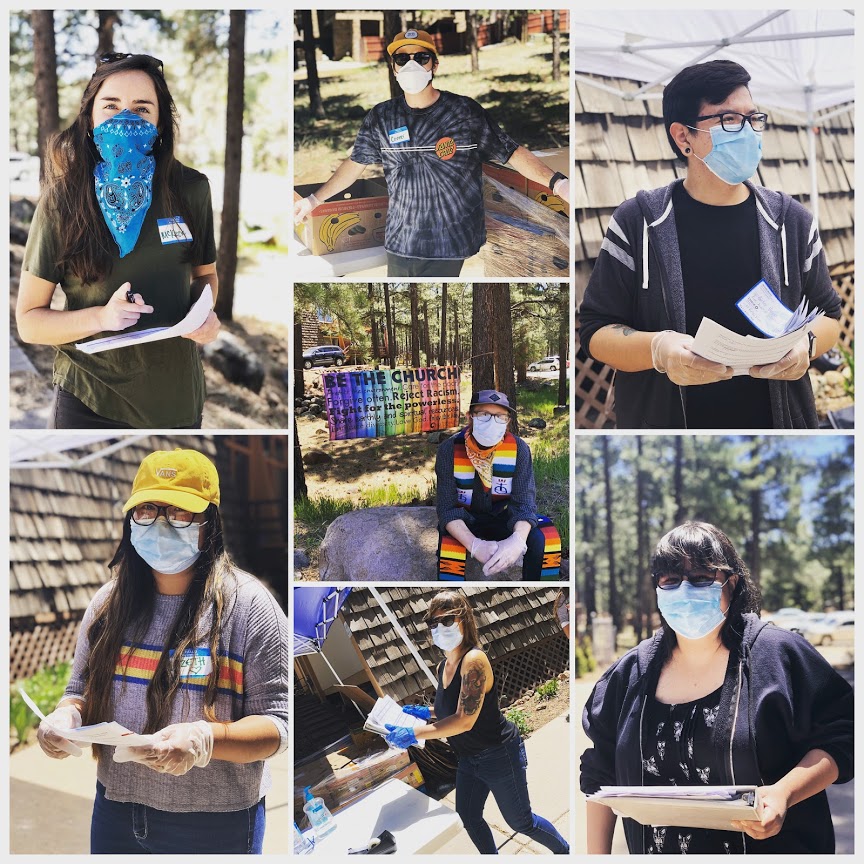 A United Church of Christ pastor and his Flagstaff, Ariz., congregation are proof that the church is not the building. Despite the challenges of online worship and ministry during social distancing, First Congregational Church of Flagstaff is working with community partners to make life a little easier for scores of their undocumented neighbors who are ineligible for federal assistance during this COVID-19 pandemic.

“The name of this mutual aid effort is Unidos Sobrevivimos, United We Live or We Survive Together.  Neighbor to neighbor, we are giving people in our community an opportunity to share what they have with the most impacted among us during this pandemic,” said Kim Curtis, a member of El Pueblo de Flagstaff and a retiring Northern Arizona University professor. “We are saying to immigrant families: we see you, we value you, we are in this together with you.“

The group initially hoped to collect and distribute $30,000 in its COVID-19 fund, raised through donations in a GoFundMe campaign. Each applicant family would be eligible for $500 in relief. But the flood of immediate requests for assistance prompted organizers to more than double that goal.

“The link to the application went live on the evening of April 22. Within the first half hour, we had 130 applicants,” said the Rev. Nathan Watts, pastor of First Congregational Church. A few minutes later, at 140 applications, the church temporarily suspended the process because “we won’t have the funds to meet the need this time, and don't want to give community members false hopes.”

First Congregational and El Pueblo de Flagstaff then set their sights on raising $75,000, enough to help 150 families. On Saturday, May 2, they distributed the initial $30,000 in $500 grants to 60 members of Flagstaff’s immigrant community.  Since then, they’ve helped 17 more. This weekend, the church and El Pueblo raised the fundraising goal to $100,000 to help 200 households. They are in touch with the other applicants and Watts said they will make arrangements to get funds to those families as quickly as they can. 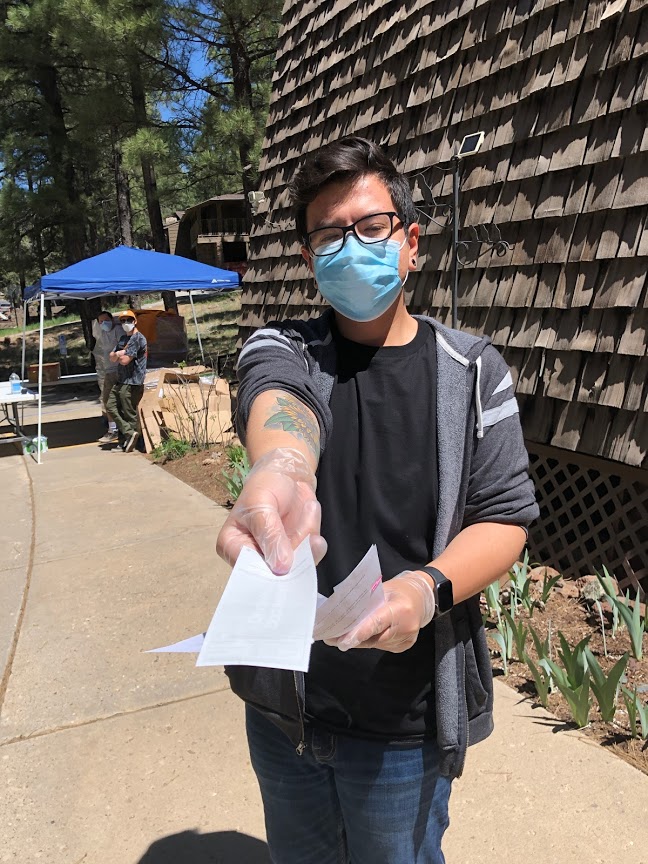 “In getting to know undocumented and mixed-status families through the legal services organization I work with, I’ve learned that most have lived in Flagstaff for decades— working here, paying taxes, raising families, and volunteering in our community. Many work in tourism and construction jobs that are major contributors to our local economy,” said Sarah Wilce, legal services coordinator, Northern Arizona Immigration Legal Services. “These jobs can’t be done from home, and many undocumented breadwinners have now lost their jobs. They aren’t eligible for unemployment compensation and they were intentionally excluded from federal relief funds. These are crucial members of our community, yet one woman told me she feels completely disposable right now. That breaks my heart! If we are members of the same community, we have to support each other in times of need.”

“We knew the need was there, that’s what motivated this mutual aid network,” Watts said as he explained how the partnership come about. “We've been building relationships with El  Pueblo de Flagstaff for about a year and were awarded a Neighbors in Need grant from the UCC in partnership with them, for something else entirely, so as a church they are familiar to us.”

‘Importance of ministering with our neighbors’

Because of their “shared values and trust,” Watts said, they were able to quickly pivot and create a new model of support to meet the needs articulated by their neighbors, despite the stresses of stay-at-home orders, online worship, and escalated health and family concerns.

“I've been speaking regularly about this campaign in our online worship and communications because it is an inspiring story and such deeply meaningful work to participate in,” Watts said. “It’s also incredibly daunting in proving just how much work there is to do to approach equity in the humanity of our community here in Flagstaff and as a nation.”

“First Congregational Church of Flagstaff, although being a small congregation, has continued to see the importance of ministering with our neighbors,” said church moderator, the Rev. Sara Day. “Not only are we an Open and Affirming Congregation, but recently we have partnered with groups in the Flagstaff area to provide immigrant rights workshops and to provide travel bags for migrants journeying through Arizona. Our student ministry also has been focusing on immigration issues during this past semester.” 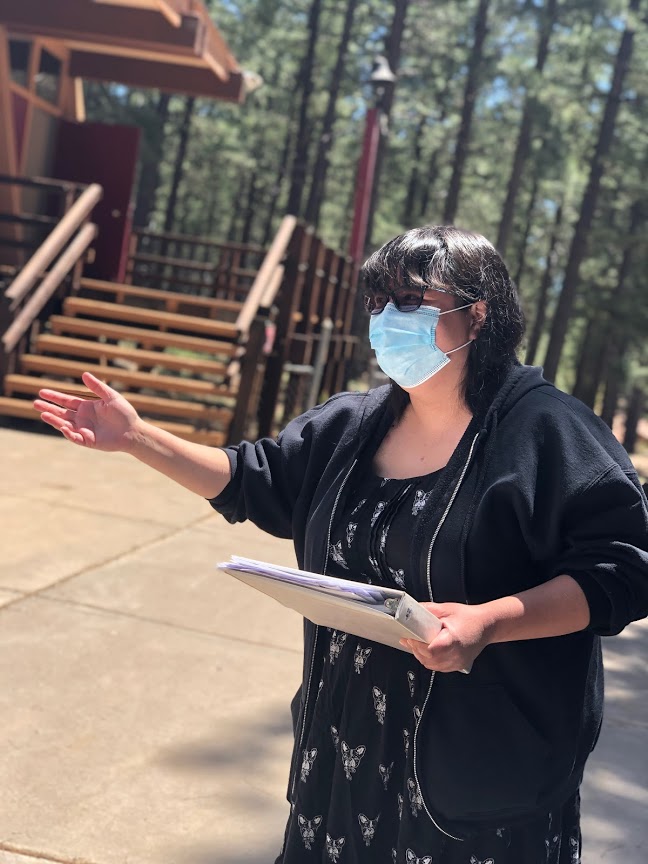 Watts said that focus spurred the church this week to join the UCC’s immigrant welcoming covenant.

“We basically became an Immigrant Welcoming Congregation over a phone call,” he said. “We had gotten some feedback that some community members, both donors and applicants, were questioning the role of the church in the GoFundMe effort, and with good reasons. I offered up the Immigrant Welcoming Congregation framework as a way to go public with our values that are backed up at regional and national levels of the UCC. We are an Open and Affirming Congregation, so the education and growth process of making these declarations is familiar to us.

“We are now are doing the educational work as a congregation, adding resources to our website and encouraging our members to use this time of physical distancing to get more deeply educated and impassioned about the importance of immigration justice work in our context of ministry.”

Watts said he sees this fundraising campaign as the first phase of assistance and immigrant justice ministry facing First Congregational in this time of pandemic. He hopes to “deepen our relationships and trust in the community” for future reforms through a peer-to-peer support network offering distribution of personal protection equipment and grocery assistance.

“What we're seeing right now is the fissures of the fact that we have not been close to comprehensive immigration reform in a post 9-11 generation,” Watts said. “The dignity, human dignity that we have denied immigrants for the last 20 years—it’s remarkable.”

For right now, First Congregational and the El Pueblo de Flagstaff community are $10,000 from their goal of assisting 150 families. That will allow them to grant aid the 140 people who submitted applications and to others on their waiting list. The Southwest Conference United Church of Christ donated $5,000 to the effort.

“First Congregational Church of Flagstaff’s mutual aid partnership with El Pueblo de Flagstaff is meeting the needs of our most vulnerable neighbors,” said the Rev. Bill Lyons, Southwest Conference minister. “Their couches may have become their pews, but their community remains the focus of their service and their love! This is just one example of how First Congregational Church of Flagstaff, guided by their pastor, the Rev. Nathan Watts, has used community organizing as a tool in their ministry plan to revitalize their congregation.”

“We are distributing the grants and occasional food supplies in a contactless drive-through manner in our church parking lot and are only doing so because we understand these grants and food boxes are literally saving lives right now,” Watts said, noting that all other in-person activities have been suspended for the foreseeable future. 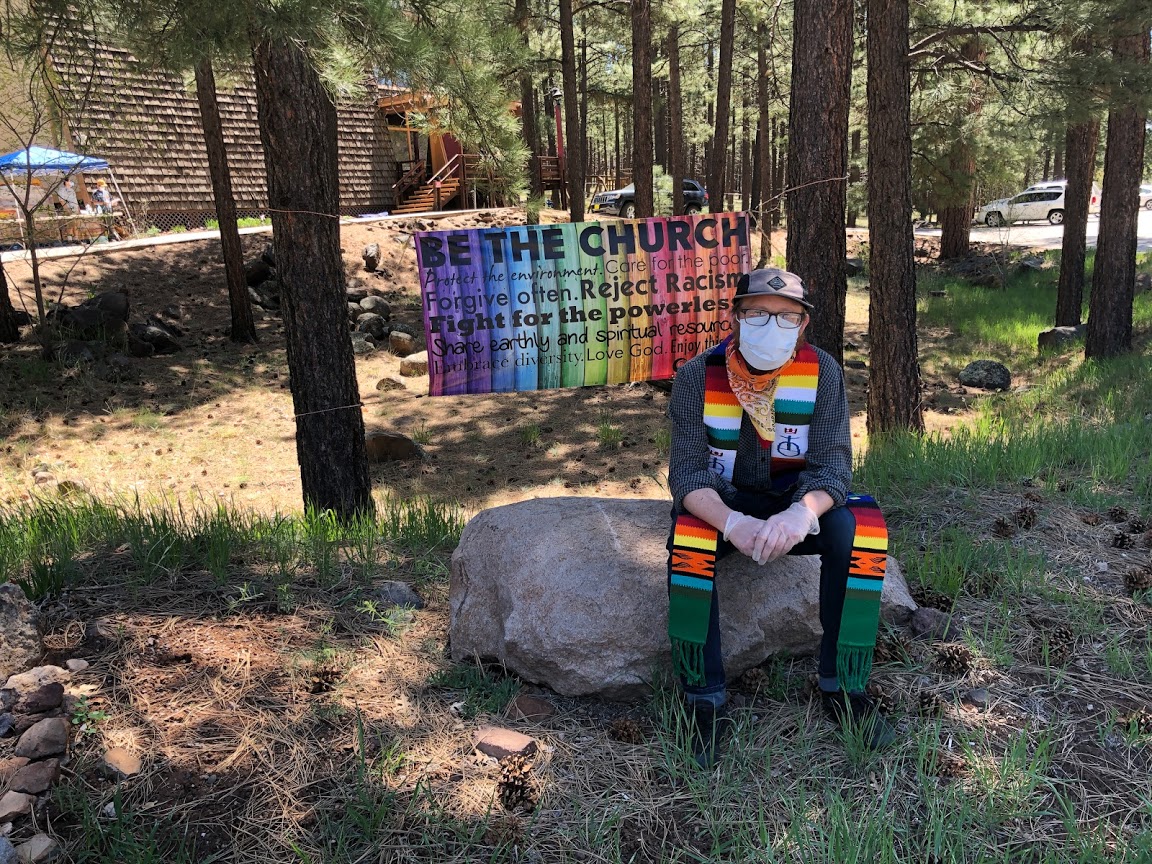 ‘Their faith leads them to this work’

“During this time of uncertainty, our congregation is meeting through online meetings and worship,” Day said. “This is exceedingly difficult for our older members, many of whom do not have access to computers or internet. While church donations are down, primarily because we do not have the visitors in worship who donate through the passing of the plate, we continue to press on with our desire to follow the call from Jesus to minister to and love our neighbor.”

“Although I am not a member of First Congregational Church, I am deeply grateful that their faith leads them to this work,” Curtis said. “They have been all I could have hoped for in a collaborative partner.”

“As a congregation that strives to extend God’s love to all people, the partnership with El Pueblo de Flagstaff is exactly what we have been called to be, the church, outside the walls of our building as well as our covenant with each other to care and act in Christian concern within our walls,” said church treasurer Janet Leung. “I see this dream coming to reality and give thanks for answered prayers.”