In keeping with their bold approach to theological education, UCC-related Andover Newton Theological School and Yale Divinity School unveiled plans May 2 to explore the possibility of a phased affiliation, beginning in Fall 2016.

The plans, announced concurrently on the two schools' websites, include a two-part transition. Phase one involves a visiting arrangement for Andover Newton at Yale Divinity School during the 2016-2017 academic year. A small group of Andover Newton faculty will spend the year at the Yale campus in New Haven, Conn., teaching students and launching pilot initiatives focused on congregational ministry education.

"During this visiting period, negotiations will continue" between the two schools, wrote the Rev. Martin Copenhaver, Andover Newton president, in a letter to the Andover Newton community. If negotiations are successful, phase two –– a permanent affiliation –– will begin in Fall 2017.

In the second phase, "we envision an 'Andover Newton at Yale' model that would result in a smaller Andover Newton functioning as a unit within Yale Divinity School," Copenhaver added. 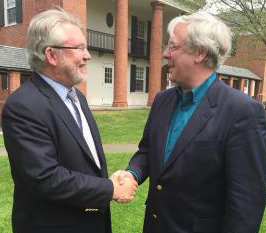 Throughout the two-year period, Andover Newton will continue to operate in Massachusetts –– at its current Newton Centre campus during the 2016-2017 school year, and at another location in 2017-2018 to allow students to complete their degrees. Students will have the option of applying for a transfer to Yale Divinity School. Those unable to complete their degrees in two years will have options "made available through carefully constructed partnerships with other schools," said Copenhaver.

Following a year-long strategic planning process, Andover Newton announced in November 2015 that it was exploring narrowing its course offerings and relocating, including the possibility of affiliating with Yale.

Yale Divinity School Dean Greg Sterling wrote that YDS "welcome[s] a partnership that will accentuate ministerial training and serve as an ecumenical complement to Berkeley Divinity School's formation of Episcopal and Anglican priests at YDS."

"Although there is sadness because we will be leaving our historic campus –– where we've been located since 1828 –– and will be reducing staff size, we're excited about how it will help us not only attain our mission, but forward it," said Copenhaver.

The focus of Andover Newton has been "the training of Congregational leaders and other religious leaders from congregational (small c) traditions," Copenhaver added. "This is our founding mission. We will refocus on that in a way that will make an impact on those denominations and on theological education in general."

Copenhaver called it a "doubling down on the church." "While others are redefining their mission more broadly," he said, "Andover Newton and Yale Divinity will refocus on our historic mission: congregations and their leaders."