An Ohio memorial to victims of gun violence more than prayers, songs and shoes 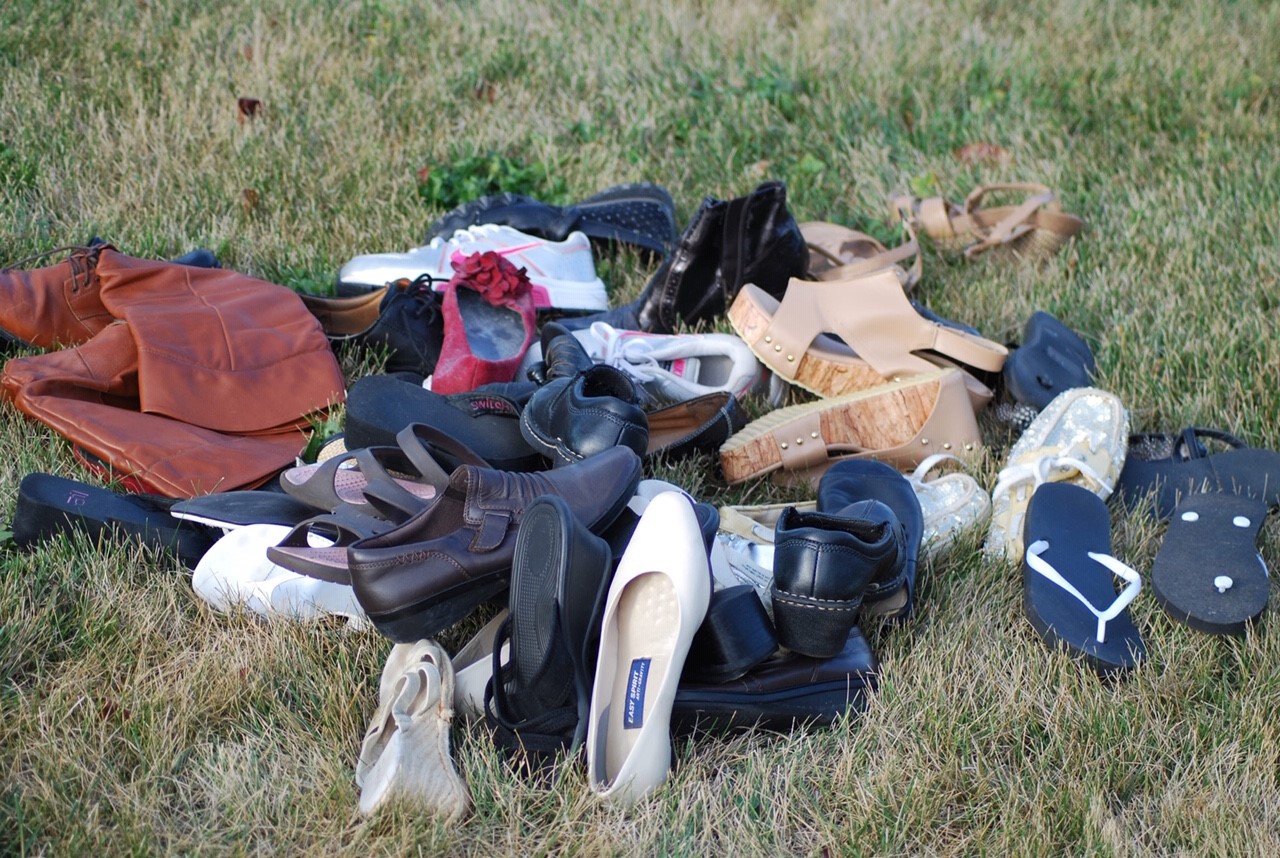 Scores of empty shoes littered the lawn outside an Ohio church on Thursday evening, a stark but poignant memorial to the lives lost in two mass shootings in El Paso and Dayton. The people of United Church of Christ Congregational in Vermilion, 30 miles west of Cleveland, were moved to act. Devastated by the latest incidents of gun violence less than 24 hours apart on Aug. 3 and 4 which left more than 30 dead and dozens injured, they planned a prayer vigil and a community call to action.

"Our secretary said when she first heard about the shooting in Dayton, the first image she saw was this pile of shoes," said the Rev. Mindy Quellhorst, church senior pastor. "The report said when people were running out of the bars in the Oregon [entertainment] district, they ran out of their shoes trying to get away. So, people piled them up, hoping the owners would come back and get them. That was the image the mission committee wanted to use on the lawn."

The image of people running for their lives in a city downstate, less than 200 miles away, was underscored by moving testimonies of Vermilion UCC Congregational members at the vigil that drew about 100 people from cities all across Northern Ohio on Aug. 8.

Karen Rossi, who chairs the church missions committee which organized the vigil, spoke about her daughter's connection to one young man who died in the gunfire early Sunday morning in Dayton's historic Oregon district. Nine people were killed in 32 seconds before the shooter was stopped by police. 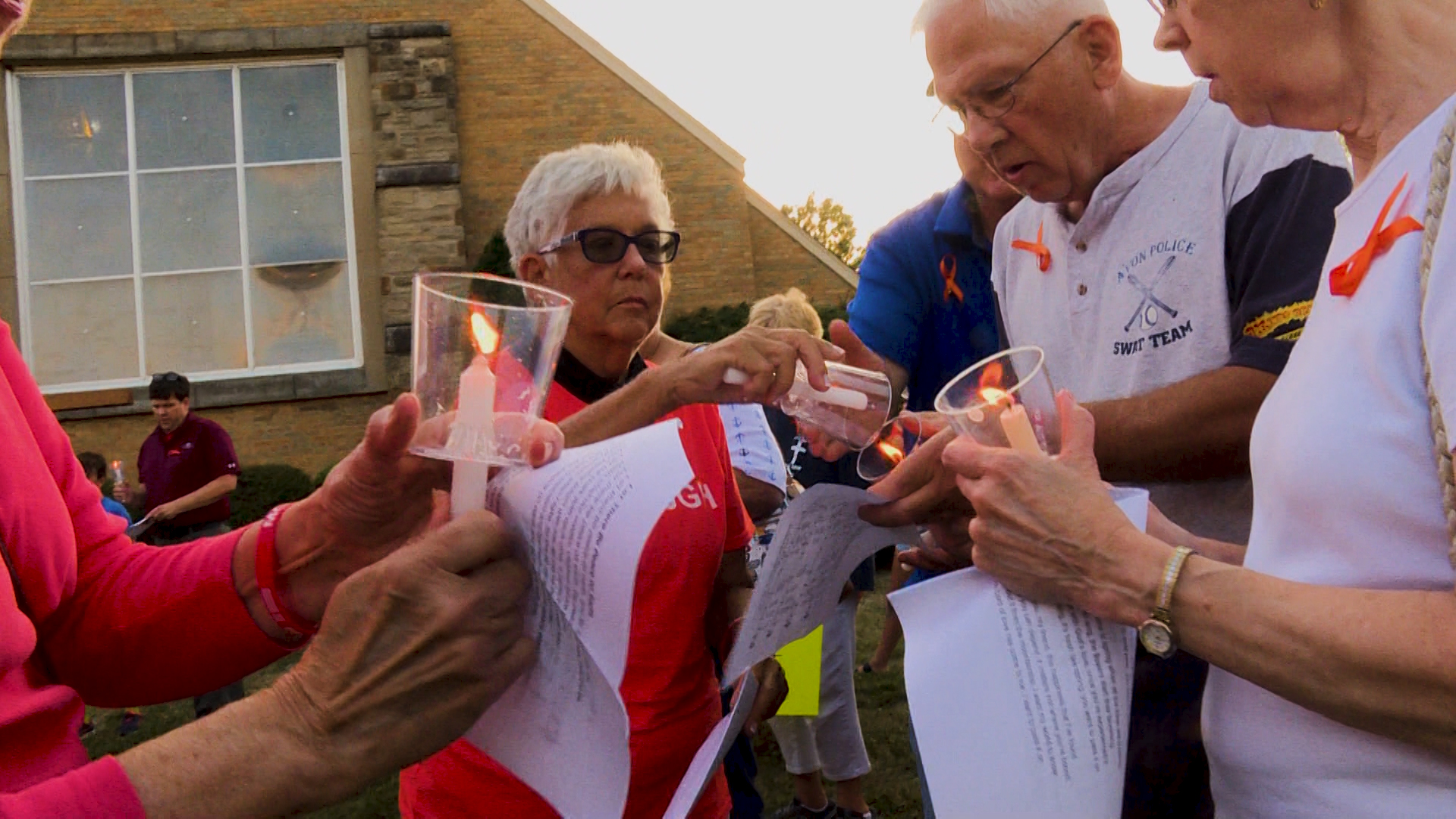 Rossi said her daughter's best friend was trying to get a hold of her boyfriend all day Sunday. He had just finished his internship at a medical facility there and was out celebrating with friends. His girlfriend couldn't reach him and learned of his death when the list of the fallen was released.

Another member, Pat Stein, shared a heartbreaking testimony about her sister–a woman diagnosed with mental illness at a time her parents did not believe it was a disease. In and out of hospitals, Stein's sister was not able to get the help she needed–her insurance couldn't cover her care. Her sister, living on the other side of the country, moved in with friends. Stein thought she was okay–until the police came to her door one day and told her that her sister had shot herself. Her friends collected guns, and she used one to end her life.

"That connection they shared, the testimonies…just powerful images," Quellhorst said, noting that the connection also touched the wider UCC. "A clergy colleague of mine from the Southern Ohio area wrote on Facebook that she had been working with young people on their internship–she came into contact with them at the medical facility while doing pastoral care–three were hurt and one was killed."

While emotional, this touching service was more than stories, songs and prayers. The members of Vermilion UCC Congregational offered resources on gun safety and suicide prevention and urged participants to push their lawmakers for sensible gun control legislation. Laws that may prevent not just mass shootings—laws that also help stop suicides involving guns. At tables set up on the lawn, a number of people took time to check out the information and write their representatives.

"It's not just thoughts and prayers," Quellhorst said. "We have to do action; we have to be in our communities, to share peace and to talk to each other. The last song (If We Just Talk of Thoughts and Prayers by Carolyn Winfrey Gillette, written after a church shooting in Texas) was all about that–it was a very powerful way to pull it all together."