After 140-mph winds, Iowans get help from each other and Disaster Ministries

It was the equivalent of a Category 2-4 hurricane, but on land. Called a “derecho,” its damaging winds clocked as high as 140 miles an hour. The storm cut a swath across central Iowa on Aug. 10, ripping up trees and crops and battering property.

Three United Church of Christ congregations were in the high-impact area. But even as they dealt with the derecho’s damage to their churches and homes, pastors and members stepped up to help their communities. 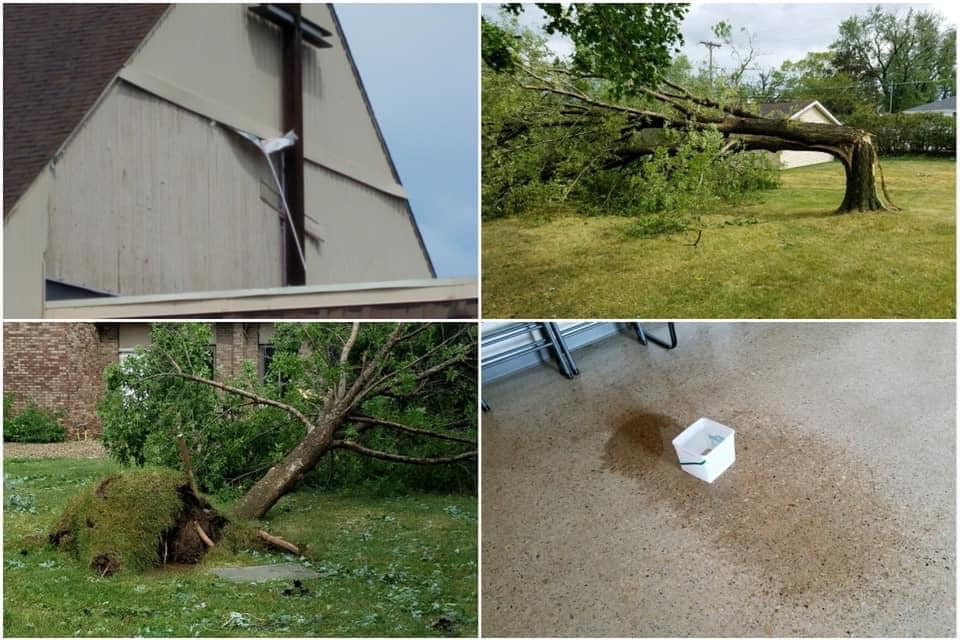 And as word was spread through social media of the needs these churches were seeing around them, “it was like Pentecostal fire for the churches,” said the Rev. Darrell Goodwin, an associate Conference minister shared by the UCC’s Iowa, Nebraska and South Dakota Conferences.

The Rev. Karen Georgia Thompson, associate general minister for Wider Church Ministries and operations, echoed Hughes’ response. She added that the communities impacted by the derecho will need long-term recovery. “It is our continued goal and commitment to assist communities through the rebuilding phase, and to support the plans of the Conference,” Thompson said.

Hope UCC in Hiawatha, Iowa (population 7,500), lost many large trees on its property (see top and middle pictures). The roofs over its garage and newly remodeled sanctuary were damaged and there was water damage in the sanctuary, said the Rev. Mary Beth Hartenstein, the church’s pastor.

But church members turned their attention more outward than inward.

“Here at Hope UCC, one of our members is the principal of a Cedar Rapids school,” Hartenstein said. “We have partnered with her to help provide items for that school's families: non-perishable food items, laundry detergent, bath soaps, shampoo.” 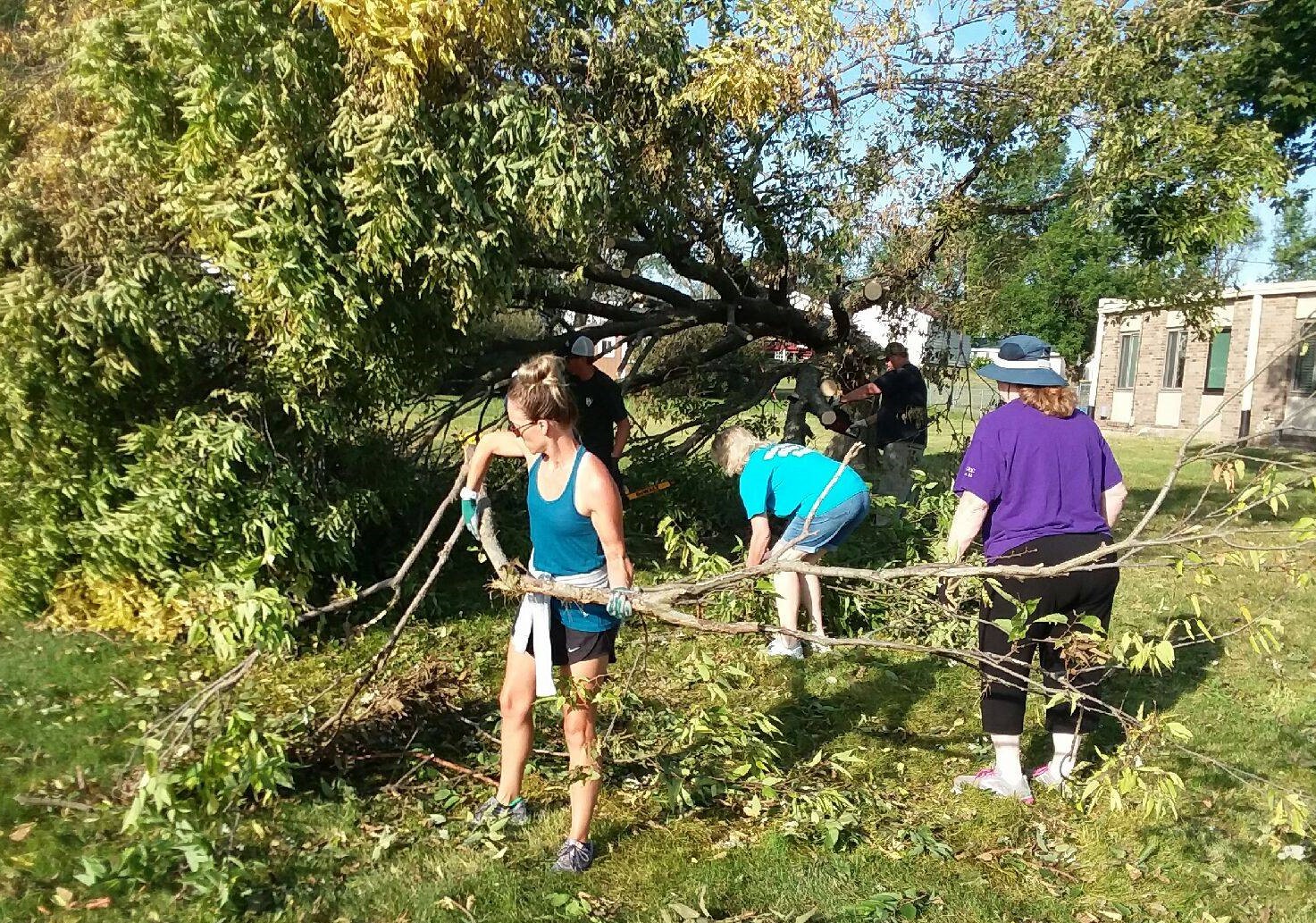 Hope UCC members also have showed their love of neighbor in other ways, the pastor said. “One couple made enough pasta for 35 individual meals and took them around their city of Marion, east of Cedar Rapids, and shared them with power company workers, mail carriers and others. Another family in the congregation gathered up gently used toys to get them out to families whose children had lost their own.”

Cedar Rapids (population 135,000) was hit particularly hard by the derecho. “There are no properties in our county left unharmed,” said the Rev. Melanie Van Weelden, pastor of First Congregational UCC in Cedar Rapids. (An image from its Facebook page appears at bottom right.)

“In the two weeks since the storm, we have experienced prolonged power outages – some people are still without power – and there are still food shortages. Cedar Rapids lost 50 percent of its tree canopy, many of which were more than 100 years old.”

At the Cedar Rapids church, “The copper cladding on the steeple peeled off and the windows were blown out, allowing water to come inside the sanctuary. The sanctuary roof also was damaged.” A tree crashed through the roof of the pastor’s house, allowing rain inside. “It took nine days to get a tarp on the roof,” Van Weelden said. “The living room and two bedrooms have been gutted and will need full replacement.”

While busy with their own repairs and cleanup, congregation members have helped cut up trees and brush, provided food, supplies, transportation and shelter to families left homeless, and given food to their church neighbors, the pastor said.

What’s more, the church has donated $10,000 to the Wellington Heights Neighborhood Association, in which the church resides, for emergency assistance to its neighbors.

First Congregational UCC in Belle Plaine (population 2,500) has 11 worshipers on an average Sunday, said its pastor, the Rev. Kate West. The storm ripped shingles off the church roof and uprooted trees, and every congregation member had property damage. But that didn’t put the brakes on a full-throttle response to needs in that community. 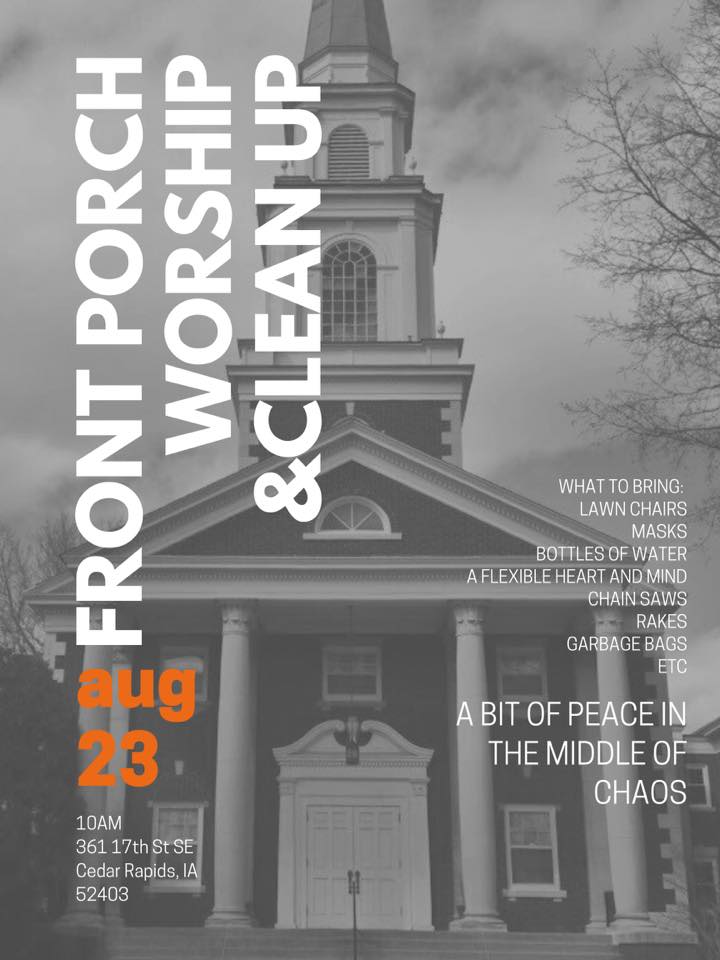 “Knowing disaster can catch people without food and power outages can cause other peoples’ food to spoil, I went out (the day after the storm) to get supplies to make 100 sack lunches, including peanut butter and jelly sandwiches, bottled water, chips, a fruit cup and a pudding cup,” West said.

“The sack lunches were gone in one hour. I made and quickly handed out another 200 sandwiches along with bottles of water. It was clear that the city needed more help. The mayor asked me to coordinate food and other resources.”

The response grew from there, with West coordinating community groups to provide sack lunches (peaking at 800) and dinners (200 hot meals daily) for eight days, along with getting cleaning supplies, tarps, chainsaws and assistance forms.

“It will be many months, and perhaps years, before recovery is complete,” Hartenstein said. “For now, we continue the work that is before us. And we do so, being mindful that others are dealing with wildfires out west, hurricanes in states to our south, and the ever present challenges of a virus that affects us all.”

“This is a story about how we can be church even when we are not in the church building: We will gather and help you clean up, and feed those who have no electricity or access to grocery stores,” Goodwin said. “We will pray with each other. Even in the midst of a pandemic, we still know how to be church and community together.”

Click here to read about other churches supporting derecho recovery in Iowa and how to offer help.