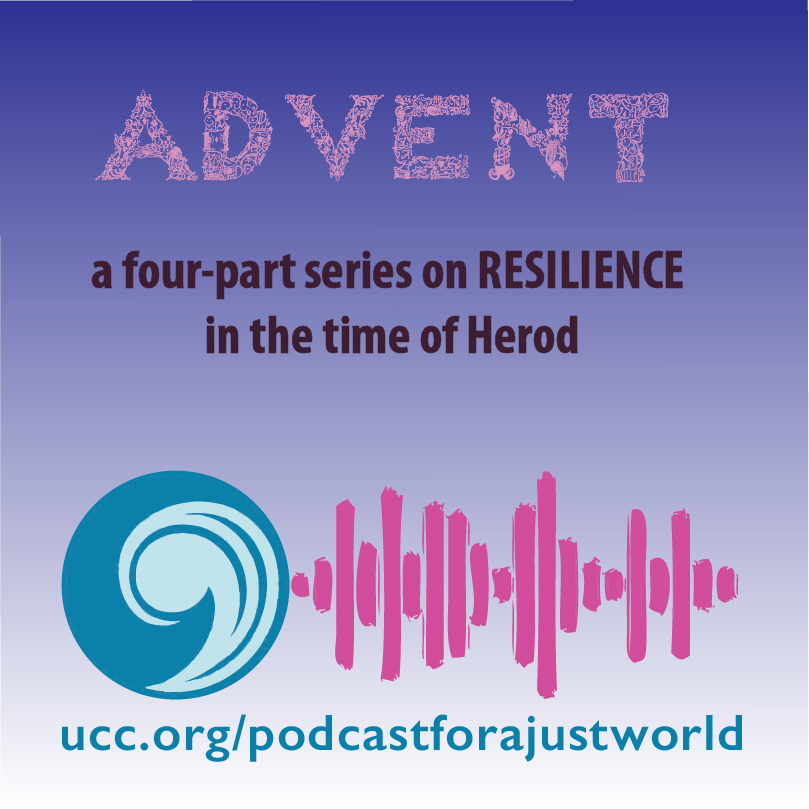 A compelling United Church of Christ resource for communities of faith building a just world for all is making its second season debut this week with a look at resilience through the lens of Advent. Podcast For A Just World begins a new four-episode series November 27, titled, 'Resilience in the Time of Herod.' Running weekly through Advent, the podcast features enlightening discussions that center around community and justice building in different locales. Discussions framed by the uncertainty and vulnerability of people currently living with the same issues raised in the story surrounding the birth of Jesus.

Produced by the Rev. Tracy Howe Wispelwey, minister for Congregational and Community Engagement, UCC Justice and Local Church Ministries, Podcast For A Just World is a great exchange of ideas, offering glimpses of motivating ministries that are changing lives.

"I hope our churches and leaders are encouraged by the dynamic and transformative work others are doing," Howe Wispelwey said. "I think leaders and anyone interested in the intersection of faith and justice will find practical examples that can translate to their own contexts."

Part I, airing Nov. 27, 'The Tools of Resilience,' features the Justice Leadership Program in Seattle, Wash., which is equipping resilient leaders, young and old, with tools for social change. This episode examines what "resilience," means to people of faith invested in a just world for all.

Part II, airing Dec. 4, 'Divesting From the End of the World,' featuring national faith organizers and pastors with Showing Up For Racial Justice, a group committed to dismantling white supremacy. This episode explores issues raised by Advent scriptures — visions of the end of the world, urgency and destruction that look all too similar to our present realities. The discussions look at resilience and its relationship to antiracism work.

Part III, airing Dec. 11, 'Coming Together,' centers around The Center For Sustainable Justice and Lyndale United Church of Christ in Minneapolis, Minn., where they are building a movement with religious leaders emphasizing relationship building and intersectional efforts over the long haul. In this episode we hear from congregation members, pastors and interfaith coalition leaders coming together in powerful and healing ways.

Part IV, airing Dec. 18, 'Cultivating Wisdom,' features Billings First Congregational Church in Billings, Mont., which is located in close proximity to several different sovereign indigenous territories and is reckoning with the relationship between privilege, injustice and colonialism in their own community. Their transformation centers on finding new resilience and life in investing in the wisdom and health of indigenous communities as well as integrating that wisdom and practice into their own liturgy and congregational rhythms.

Howe Wispelwey, who in the past year produced 24 podcast episodes in four different series, said she learned a lot from her listeners in the successful first season. Going forward, each podcast will be longer than the initial 20-30 minutes, with a wider focus.

"The episodes will push more towards 45 to 60 minutes this season and feature several voices woven together with focused questions and broader liturgical reflections rather than a segment dedicated to lectionary reflection and an interview," said Howe Wispelwey. "I think this format will be really engaging and compelling and allow for more voices to be part of the reflection and offering."

"I also want to lift up that in doing this work I connected with other UCC ministers producing an incredible lectionary-based podcast called The Word is Resistance. Knowing that powerful and high quality resource is available I wanted to push PFJW more into specific work and examples from our wider church communities and partners in engaging faith and justice."

After the Advent series, the podcasts will be looking toward the 2019 liturgical seasons of Lent and Easter, and will examine critical issues facing people of faith right now.

"Lent will be a full six episodes and will again be co-hosted by Rev. Velda Love, Minister for Racial Justice," Howe Wispelwey said. "We will continue Sacred Conversations To End Racism (SCTER) and where last season's SCTER series really pushes into locating oneself in the construct of race, and featured mostly guests of African descent, this season will engage the difference between race and cultural groups, and feature leaders and guests from the Latino community to the Pan Asian community and beyond. It will also coincide with the release of Phase 2 of the program."

"Easter will be a four episode series around resurrection creation and climate change," she continued. "Some of our ministers and churches are doing incredible and urgent work in this area and I'm very excited to lift up more examples of what is possible as well as grapple with some very difficult realities."

Wispelwey, who hosts all the episodes, said she is heartened by the wide interest in the Just World For All Podcast.

"I was so happy to see churches using the podcast and promoting the resource on websites and social media," she said. "I also know that a large percentage of our listeners are not from or part of the UCC and I love that it is serving to share this unique and beautiful legacy of faith and justice in the world beyond our own UCC family."

The podcasts can be found here-Ucc.org/podcastforajustworld, and all are archived on iTunes and SoundCloud.