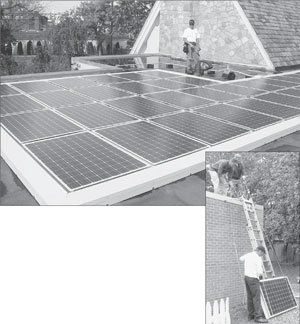 When the job was finally completed, one environmentally-conscious UCC church was ready for a real "solarbration."

The task, in this case, was the installation of a solar electric system with panels on the church's roof.

Members of Christ Congregation in Princeton, N.J. - which maintains a three-way affiliation with the UCC, the American Baptist Churches and the Alliance of Baptists - had lots to celebrate. There was joy apparent at worship and at the luncheon that followed, and certainly a sense of significant accomplishment.

Unobtrusive roof panels now convert the sun's rays into more electricity than the church uses most days of the year. The excess is fed automatically into the commercial power grid and earns the church a very sizeable reduction in its utility bills.

But more importantly, as far as members are concerned, they are reducing their "carbon footprint" by cutting the greenhouse gasses that cause global warming.

And they are witnessing to their conviction that the Bible calls Christians to be good stewards of God's creation.

Their pastor, the Rev. Jeffrey Mays, has been preaching that kind of stewardship for years.

"When I quote John 3:16," Mays says, "I make clear that God's love for the world includes all that God has created - all that God called 'good' in the first chapter of Genesis." He has been pastor in Princeton for 20 years.

The head of New Jersey's Green- Faith, a religion-based organization that advocates improving the environment, says Christ Congregation is providing real leadership by its efforts.

The chair of the congregation's board of deacons also is enthusiastic. "It was worth all the effort, for sure," says Bill Gaventa, who is an associate professor at the nearby Robert Wood Johnson Medical School. "The project helped our members take the issues more seriously," he says. "Some are considering installing solar panels on their homes. Others have taken other steps. I bought a hybrid automobile."

After implementing several more-common environmental actions — like avoiding the use of styrofoam cups, installing energy-efficient windows, and keeping the thermostat set low when the building is not in use — the congregation made a careful analysis of the merits of a solar electric system.

According to the Rev. Charles McCollough, a member of Christ Congregation, "the policy statements of the UCC had a lot to do with the decision to install the solar electric panels on the roof."

McCollough helped draft the 1999 General Synod statement on Global Warming, and chaired the UCC's working group on "Integrity of Creation, Justice and Peace."

The church offered a screening of the Academy Award-winning documentary, "An Inconvenient Truth," which features former Vice President Al Gore. Among guests who viewed the fi lm were students from Princeton High School, located across the street from the church. Afterward, the teen-agers enthusiastically followed the installation of the church's solar electric system and wrote essays on environmental issues.

Many had never been inside the church until they attended the movie as a group.

McCollough and his wife, Carol, had taken the teachings of the policy statement seriously and installed a solar electric system on their farm house in nearby rural Hopewell in 2003. They discovered that although their climate is not ideal for solar energy, they soon began saving enough on electricity bills to recover the installation costs. They use the power their system generates to help heat and light not only their home but also the barn-studio that Charles uses in his retirement work as a sculptor.

All this didn't happen without stress. There was rough sailing for the first part of Christ Congregation's solar electric project.

When the congregation first studied the potential of installing the panels, Brooke analyzed the hours of sunlight hitting the roof. He ascertained that a large pin oak tree on the church property would create too much shade and recommended that it be taken down. If the tree was removed, an estimated 40 photo-voltaic panels would power a 7.2 kilowatt system and provide for 75 to 80 percent of the church's energy needs.

State officials responsible for the New Jersey Clean Energy Program were encouraging and made a grant to help cover expenses. So the church obtained an initial permit for the project, and a professional arborist was employed to remove the tree.

But the local shade-tree commission objected after several neighbors opposed the removal of the 60-foot oak. The shade-tree enthusiasts arrived on the scene just 30 minutes before the arborists unloaded their chain saws.

By that time church members were deeply committed to the project and found a local lawyer who eagerly presented the church's case to the borough council. Church members also sought to explain the theological and environmental rationale for the project. They emphasized the importance of reducing dependence on fossil fuels and noted the hidden costs of pollution.

Eventually, a compromise was worked out. The church would receive a new permit but would need to see that three new trees were planted in the borough, as well as three on the church property.

Ironically, when the pin oak was being removed it was discovered that the tree was infected with a bacterial leaf scorch and would need to be removed in any case.

During the weeks that this drama was playing out, the story made headlines in Princeton newspapers, thus building up the church's reputation as the first "green church" in the borough. Overall, the church has enjoyed widespread support.

A progressive, open-and-affirming church, Christ Congregation's membership enjoys its diversity of viewpoints on many issues, but the church was clearly united when it needed to stand up to neighborhood pressure. Members turned out in full force at the Borough Council's September meeting.

That commitment led GreenFaith to salute the church for "putting their faith into action for the earth."

The Rev. John Deckenback, the UCC's Central Atlantic Conference Minister, is also enthusiastic about the Christ Congregation's efforts. The Conference has an active committee, headed by Jane Schaefer of Newark, Del., at work for energy alternatives.

To keep, to care

When McCollough was asked to preach for the post-installation "solarbration," he challenged the centuries-old theology based on the first chapter in the Bible. Genesis 1:28 asserts that humanity's purpose in life is to subdue the earth and have dominion over all creation. McCollough prefers the second chapter of Genesis where God's call to keep and care for creation is recorded.

"Through the ages," he told those who attended the solarbration, "we have dominated the earth, the forests, animals, plants, waters, fish, land, skies, and - when we could get away with it - we have dominated other people."

"We live in the age of overload," he said. "We have overloaded our cars, homes, stomachs, our time, our work loads, landfills and even our atmosphere. We have subdued and dominated God's creation so thoroughly that we - at least the very poor - are drowning and cooking in our overload."

He cited Isaiah and other prophets who condemned such abuses of God's creation and the apostle Paul who described "the whole creation groaning in travail."

"As a people," Mays says, "we are open to new ways of thinking and doing. We are concerned about the degradation of our environment and are particularly concerned about the issue of global warming. And we are eager to affirm God's creation and our call to be stewards of creation."

The Rev. J. Martin Bailey is former editor of United Church News' predecessor publications, United Church Herald and A.D. Magazine. He also is the former Associate General Secretary of the National Council of Churches for Education, Communication and Discipleship. He and his wife, Betty Jane, live in West Orange, N.J.