StillSpeaking magazine is published twice a year and is sent to United Church of Christ Annual Fund contributors of at least $50 annually, as well as to all “5-for-5” churches — congregations that contribute to Basic Support and the four special mission offerings. To learn more, contact the Office of Philanthropy and Stewardship at 800.846.6822 or email giving@ucc.org.

The Spring/Summer 2015 issue of Stillspeaking features the New York City Fire Department’s first female chaplain—the Rev. Ann Kansfield, a UCC minister and pastor of Greenpoint Reformed Church in Brooklyn. Another UCC trailblazer featured in the issue include the Rev. Edgar Krueger, who at age 84 still drives across the border into Mexico daily from his home in Texas to advise Mexican factory workers of their rights under the law. Read about the strides we’ve taken as a denomination toward divestment from fossil fuels to combat climate change, as well as the increasing demand on our UCC military chaplains in the wake of the repeal of “Don’t Ask, Don’t Tell” legislation.

"O sing to the Lord a new song!" (Psalm 98:1) The Fall 2014 issue of StillSpeaking magazine focuses on the new ways of being church in the 21st century. Amidst the problems and confusion of the present, the articles find stories of hope and renewal springing anew in unexpected places. From worship services for homeless individuals in a public park in Massachusetts to staying present and uncomfortable in Ferguson, Mo.; from small churches in crumbling buildings to the new online presence of Extravagance UCC; from traditional to artistic to unconventional — UCC members are creating the future of church and faith formation through daily prayers and actions … in community.

The Spring 2014 issue of StillSpeaking magazine focuses on the many ways God is still speaking in conflicted areas of the world. Drawing on the passage from Matthew, "For where two or three are gathered in my name …," the issue examines in depth how the UCC and its global partners are working for life, peace, and justice in Congo and Syria; how the generosity of UCC members helps our response to major disasters throughout the world; and how, each day, we work to bring God’s extravagant welcome to all. 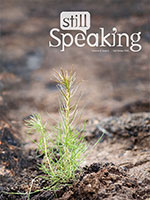 The Fall 2013 issue of StillSpeaking magazine asks the question of the prophet Jeremiah, "Is there no balm in Gilead?" Through its pages, we learn about the aftermath of the Boston Marathon bombing through the eyes of Old South Church in Boston. The Rev. Matt Crebbins of Newtown, Conn., goes to Washington to protest gun violence. And personal stories highlight the struggle against bullying in all forms. Plus, a serious look at General Synod through the eyes of one visitor raises questions about the UCC’s extravagant welcome, and calls everyone to be the balm that "makes the wounded whole." 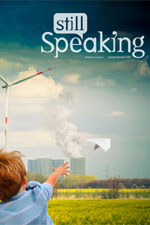 The Spring 2013 issue of StillSpeaking magazine takes an in-depth look at our role as stewards of all manifestations of God’s creation. This issue contains stories of renewal, including a new kind of “outdoor church” in Colorado that redefines “church growth,” and an article calling for a redefinition of church to strengthen our ties to creation. You’ll also learn about the seminal “environmental racism” study done by the UCC in 1987, and how its ramifications are still being felt today. Plus, the UCC’s Ann Hanson reflects on why it’s important that the “Our Whole Lives” sexuality curriculum be introduced to more congregations. We also have insightful articles on the UCC returning land to Native American Indians in South Dakota, fracking, the debate over science vs. faith, and much more. 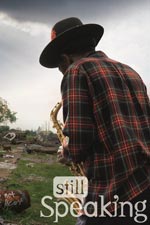 The Fall 2012 issue of StillSpeaking magazine is an examination of hope rising like a phoenix from the ashes of despair or devastation. In this issue are stories of churches renewed –– like Beneficent UCC in Providence, R.I., and St. John’s UCC in St. Louis. You’ll also discover people and places breaking new ground and finding new paths, people who’ve made a difference in their church and in the world: the Rev. Everett Parker who, at 100, continues to be an advocate for women and persons of color in broadcast media; the Rev. Shari Prestemon and Back Bay Mission, as it continues to return from Katrina; the Rev. Ken Samuel and Victory UCC, redefining itself according to God’s call, and many more.

This Spring/Summer 2012 issue of StillSpeaking magazine brings you a compelling mix of stories and photos about “the least of these”—a selected look from a UCC perspective, including a message from General Minister and President Geoffrey Black, at contemporary people, places, and issues that recall Jesus’ words: “As you did it to the least of these . . . you did it to me.” Featured in this issue are: “LGBT Lifeline,” the story of a Massachusetts church and its ministry with LGBT people seeking asylum in the U.S., “In Egypt: Giving Thanks to God and Garbage,” a fascinating look at the people and economy of Menshayat Nasr, Cairo’s “Garbage City,” along with a photo essay on immigration from the American Southwest, a profile of a successful church/arts program in Philadelphia, and much more.