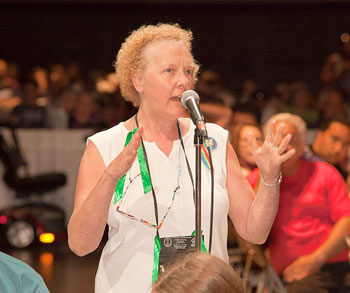 The resolution, brought by the Massachusetts Conference and backed by 10 other conferences, calls for enhanced shareholder engagement in fossil fuel companies, an intensive search for fossil fuel-free investment vehicles and the identification of "best in class" fossil fuel companies by General Synod 2015.

By June 2018, a plan would be prepared to divest UCC funds in any fossil-fuel company, except for those identified as "best in class" which the Rev. Jim Antal, the major proponent of the resolution, called an "oxymoron," noting that no such fossil fuel companies are likely to exist.

"Today, the national Synod of the UCC added another 'first' when it became the first national faith communion to vote to divest from fossil fuel companies – and to do it with the support of its major investment institution, United Church Funds," Antal said.

"This resolution becomes a model for all faith communities who care about God's creation and recognize the urgent scientific mandate to keep at least 80 percent of the known oil, gas and coal reserves in the ground. . .  This vote expresses our commitment to the future. By this vote, we are amplifying our conviction with our money."

The original proposal brought to General Synod called for a five-year movement toward divestment. In committee, a substitute resolution that Antal and the leadership of United Church Funds collaborated on to address the UCF and Pension Boards concerns of their fiduciary responsibility to maximize investment.

"This resolution calls on each and all of us to make difficult changes to the way we live each day of our lives," said Donald Hart, UCF president. "Implementing the multiple strategies outlined in this resolution will demand time, money and care — but we believe Creation deserves no less."

The Pension Boards didn't participate in the negotiations that led to the substitution resolution that was ultimately adopted. After the vote, Michael A. Downs, Pension Boards CEO issued a statement that his organization "will support and implement the resolution, to the extent possible, within our legal responsibilities as fiduciaries of the Annuity Plan for the UCC, acting on behalf of the active and retired members who have entrusted their retirement assets to us."

During the floor debate, a number of delegates urged consideration of the economic impact this course of action will have on jobs and the economies of states like Montana, Wyoming and Kentucky, which are heavily dependent on the fossil fuel industry.

The General Synod also passed a resolution on making UCC church buildings more carbon-neutral. Earlier in the week, the committee amended the proposal to call on UCC congregations to conduct energy audits on their facilities as the first step toward carbon neutrality. Sara Brace, committee chair and delegate from the Pennsylvania Northeast Conference of the UCC, also stressed that achieving carbon neutrality can be a gradual process for congregations.

"The encouragement portions of the resolution are what resonated with many committee members," said Brace. "By reducing our carbon footprint, we are helping the environment one step at a time."