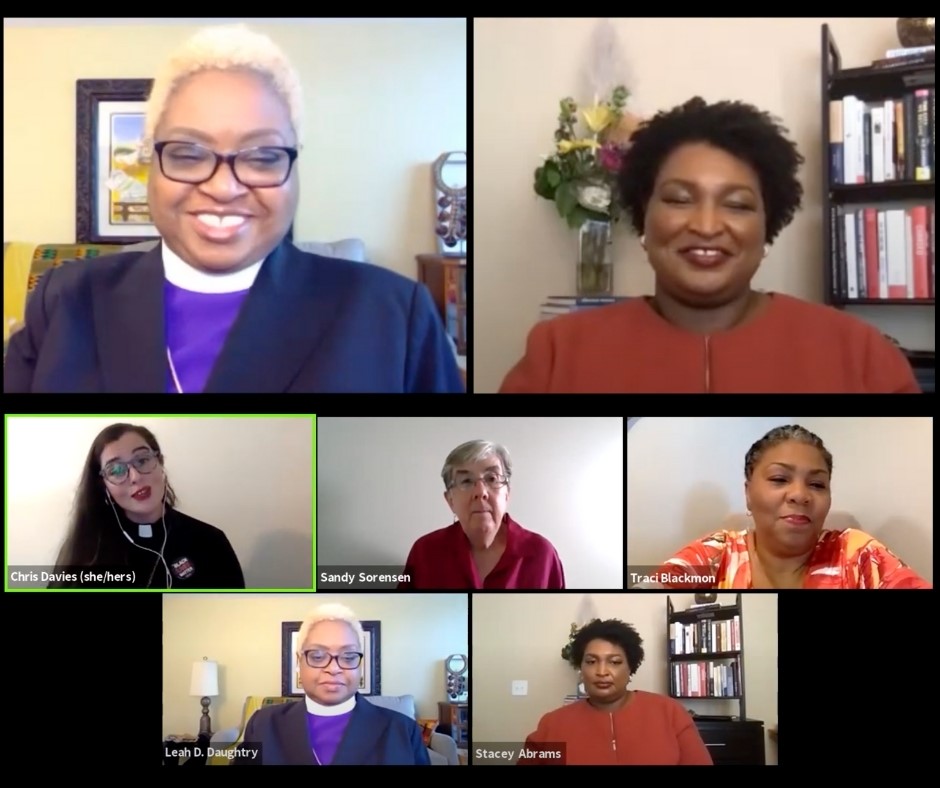 A spirited dialogue about voting rights, the erosion of the democratic process, and the importance of the census fueled an informative United Church of Christ webinar on Tuesday. The conversation aimed to discern how people of faith can ensure that the votes of all Americans are counted in this year’s election process.

Principles in the Aug. 4, discussion on Zoom, moderated by Associate General Minister the Rev. Traci Blackmon – Stacey Abrams, attorney, author, entrepreneur, former minority leader of the Georgia House of Representatives and founder of Fair Fight, and the Rev. Leah Daughtry, spiritual leader, presiding prelate of The House of the Lord Churches, Washington, D.C., and former C.E.O. of the Democratic National Convention.

The passion of both advocates and the strong link between their faith and their work to support the disenfranchised was evident throughout the hour.

“I ground my faith and my discipline in the admonition that faith without works is dead. So I spend my time working on how I can live my faith best by delivering access and serving those who are left behind and left out,” Abrams said. “That’s that work I do on voting, that’s the work I do on the census and the work we are doing … which really focuses right now on building justice in the South.

“We have an initiative called 'South Strong' focusing on how COVID-19 and its current debacle and future pain is being visited on communities that have the least amount of resilience and the greatest vulnerabilities,” she continued. “I am the daughter of pastors and I was raised to believe the way to live my faith is to practice the works, and that’s what I have been trying to do every day.”

Blackmon began the discussion, by referencing the lives of two freedom fighters the United States recently lost. Civil rights giants from Georgia, Congressman John Lewis and Rev. C.T.  Vivian embodied faith and works by dedicating their lives to human rights, racial equity and the right to vote for Black Americans–hard fought rights that Blackmon noted are once again under attack.

“Ever since the Supreme Court gutted key elements of the Voting Rights Act in 2013, we’ve seen a resurgence of voter suppression. We’ve witnessed the strategic closing of thousands of polling places in Black neighborhoods in the last seven years and the purging of voting rolls with no data driven evidence of significant voter fraud,” Blackmon said. She pointed to last month’s “meltdown” in Georgia’s statewide primary as continued erosion of the democratic process.

Abrams put the issue in context by asking participants think back to 2005-2006, even before the Voting Rights Act was “eviscerated” by the Supreme Court. “That’s when we really saw the first moments of voter suppression getting footing in the 21st century. That’s when Georgia and Indiana passed laws to allow for restriction of voter ID’s. Not based on fraud or bad usage, but a very direct, determined attempt to start to limit who could use their identification to access the right to vote.” Abrams then pointed to the proliferation of laws in 2009-2010, in states where Blacks were active in the election process, that eroded early voting opportunities.

“We need to remember that this has been a 20-year endeavor to undercut access to the right to vote. A right that has only really existed for Americans of color starting in 1965.”  A right, Abrams said, that came about even later for women of color, Latinos and Native Americans.

“I wanted to keep in mind that this is just the 21st century alliteration in a century’s long fight," she said. "This is just the newest face of voter suppression.”

Rev. Daughtry added that she’s been asked in the last few weeks to celebrate the centennial of suffrage in America, with this year being the 100th anniversary of women getting the right to vote. But in 1920, only white women got the right to vote.

“Voter suppression really was written into the Constitution of the United States, when only white men could vote, and we’ve been amending the process ever since,” Daughtry said. “The time in which voting has actually been a fair and free enterprise has been a fraction of our nation’s history… a small fraction. It peaked, and now we are going back. We seek to exclude people, rather than include them.”

Abrams named voter suppression as being prevented from or discouraged from voting. Citizens need to be able to register and stay on the roles, cast a ballot and have that ballot count. She presented a laundry list of roadblocks that potential voters often have to navigate. “Anything that prevents one of those things from happening … are acts of voter suppression and they look different depending on the state you live in.”

Blackmon asked about strategies that churches can use to overcome these obstacles.

“Voting processes are run by the state not the federal government,” Daughtry said, noting there are a hodgepodge of laws, rules and regulations that govern U.S. elections. So, she said, churches can help by partnering with people in their communities to ensure that those who want to vote can exercise their right to do so. The D.C. pastor shared examples on how following the process means something different in every locality. “For communities of faith, in every state, understanding what the laws are and determining what is the thing that we can do as trusted partners, as trusted locations, as trusted leaders … to help people in the communities in which we serve participate in this American democracy.”

Both pointed out different requirements around the country that impede the voting process and cause people to be rejected, and how organizations like Fair Fight are challenging those constraints.

“You vote from the pews,” Abrams added, suggesting that pastors set aside time during service to walk people through the practice of filling out an absentee ballot application, and how to put it in the drop box. The idea is to empower people to use their voice, regardless of where they are on the political spectrum.

“One way to be of service is the demonstration role that church plays. Not just telling people, but showing them,” she said. “Make sure people know what the rules are where they are. That helps us get hundreds more to participate, because they don’t feel ignorant and confused by the process. … Let’s do all the steps - the application, the ballot, the sending.” Telling them how to vote, not who to vote for.

Blackmon talked about the challenges faced during this election cycle because of COVID-19 that also extend to the Census. “I’m trying to figure out what we are going to do about something that is going to impact us for ten years that seems not to be getting much attention at all,” she said.

Abrams said she created Fair Fight in 2018 to fight against voter suppression and founded Fair Count to fight against an attempt to undercut the census. She listed several obstacles in addition to COVID that undermine the 2020 Census, two being inadequate funding and the citizenship question “which was designed to terrify communities of color and to scare immigrants (and others) out of participation ... the census is not a count of citizens, it’s a count of people in America.” She also spoke against the recent decision to shorten the amount of time census takers are knocking on doors, cutting off the count on September 30 – which means 45 days in the field instead of 75, in a year the count is further behind the progress in 2010.

“The overall count is behind by 4-percent, but the count for Black people is behind by 14-percent, the count of Latinos is behind 12-percent … the count of Native Americans is behind 25-percent.  Already behind the count overall, dramatically behind for communities of color and now you are going to stop counting sooner than you normally would?” To fill in the blanks Abrams said, the census will use a statistical device, data from the surrounding census tracks to figure out who’s missing. “If we’re missing half of those who should be counted, and you are guessing by who has responded, and if the traditional responders are white … you erase communities of color from the census.”

Sandy Sorensen, director of the UCC Washington, D.C. office urged participants to call on Congress to exercise its oversight powers on the Census Bureau.

When the discussion turned to the political process and how people of faith can best answer the late John Lewis’ call to keep marching forward, to keep voting in an environment where Blackmon said “there doesn’t seem to be any connection across the aisle anymore,” Daughtry had a quick response.

“My idea of democracy is grounded in the notion that we all are equal and that God sees us each as valuable, as worthy, as each having a voice, and that voice is worthy of being heard, whether I agree with it or not,” she said, continuing that the current American political system often discounts the voices of the other "not like me" as unimportant. “We have to end this demonization, to be in community and do the radical, revolutionary work of love and relationship building, of listening, of talking, of including even the people we don’t agree with."

Speaking the language of community is where people of faith need to plant their flag, Daughtry emphasized. “What do we build, what do we grow together? This is about an American democracy that is based on the fact that everyone participates. People of faith are more equipped and responsible than everyone else to fight for the idea that everyone’s voice has value, everyone’s voice must be heard.”

The hour-long discussion, part of Justice and Local Church Ministries’ Tuesday for Nuture series can be seen here.

“Organize the Church” was one of several election-year webinars promoting voter engagement through the UCC’s “Our Faith, Our Vote” initiative. Another, scheduled for Tuesday, August 11, at 3:30 p.m. EDT includes the Rev. Allan Boesak, South African activist and past president of the World Communion of Reformed Churches, and the Rev. Curtiss DeYoung,CEO of the Minnesota Council of Churches, on “Sankofa: Reaching Back and Stepping Up.”The Rev. Traci Blackmon will act as moderator. Register here.