Ecumenical Advocacy Days is a yearly gathering of the ecumenical Christian community. This weekend of learning, worship and advocacy is grounded in biblical witness and our shared traditions of justice, peace and the integrity of creation. Our goal is to strengthen our Christian voice and to mobilize for advocacy on a wide variety of U.S. domestic and international policy issues.

Lift Every Voice! Racism, Class and Power: What to expect at the 2016 Ecumenical Advocacy Days 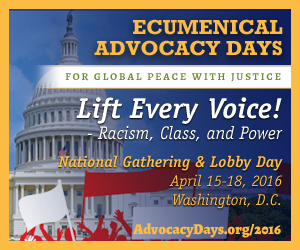 Register for the 2016 Ecumenical Advocacy Days!

In a major U.S. election year when lives, votes and the global economy are at stake, followers of Christ ask, “Who has a voice?”  The response is, “Everyone!”

But in our neighborhoods, cities, and around the world, the voices of too many people are silenced. For generations in this country, social, economic, corporate and political powers have colluded to reduce and eliminate access to voting. Historically, systemic injustice has been carried out through poll taxes, unreasonable and egregious voter requirements and violent opposition to calls for justice and change. Today, we are experiencing injustice through not only an attempt for voter suppression, but police brutality, detention and mass incarceration. In the U.S. and around the world, communities whose health, water, air and land are threatened by corporate greed, voices for justice are often curbed through extreme violence, intimidation and murder.

In this country, communities of color are under siege: named and unnamed black lives are killed each year by police; immigrants are detained and scapegoated; and public displays of discontent and calls for solidarity have too often been met with disregard, suppression or violence. Around the world, decisions that affect the wellbeing of lives and the entire global economy – one based on continued growth despite the limits to earth’s natural resources and capacity to absorb such growth – are often made in closed boardrooms and in great secrecy.

Come to “Lift Every Voice” on April 15-18, 2016 where people of faith will speak truth to power concerning the suppression of political and economic rights, and the corporate undermining of the local voice of ordinary people in the U.S. and around the world. Through prayer, worship, advocacy training, networking and mobilization with other Christians, we will face the reality of racism, class and power impacting politics and policies and advocate for the liberty of “Every Voice!” - all culminating with EAD’s Congressional Lobby Day on Capitol Hill.

Register for the 2016 Ecumenical Advocacy Days!