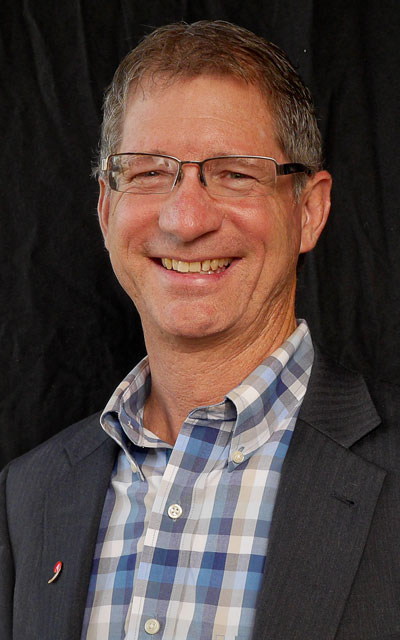 With a smile on his face and eyes taking in the room from behind his glasses, the Rev. John C. Dorhauer looked with gratitude at the group that just affirmed his candidacy to lead the United Church of Christ. That group, the UCC Board of Directors, approved Dorhauer, conference minister of the Southwest Conference of the UCC, as the nominee to the become the denomination's next general minister and president.

Needing affirmation by a two-thirds vote, Dorhauer received 39 of a possible 44 votes—with one no vote and four abstentions—on Thursday, March 19, during the UCC Board's spring meeting. Just after the vote, board members greeted Dorhauer by singing his favorite hymn, "Be Thou My Vision."

"I love my church," Dorhauer told the group. "If youʼre asking me why I'm here, and why I responded to this call to serve, it's because I love my church.

Approval by delegates of the 30th General Synod (taking place June 26-30 in Cleveland) is the final step in confirming Dorhauer's candidacy. That vote must pass with a 60-percent majority to make him the ninth general minister and president of the UCC, who would lead the nearly 1-million-member denomination into the future.

The Thursday vote by board members followed a Q&A session, with Dorhauer fielding questions on his vision for the UCC‘s future.

Dorhauer pledged to be an advocate for full accessibility in the church, outlined ways the national setting can lead in faith formation in the 21st century, spoke to how he would welcome differing theological views from local churches, the importance of youth ministry, and his vision for the conferences of the UCC.

"[Conferences and conference leaders] are absolutely critical as we move forward. It is incumbent to build and maintain relationships with all covenanted partners, and we can't to do that with local churches without the help of conferences," he said.

A 30-minute executive session also gave board members a chance to review the recommendation from the General Minister and President Search Committee and discuss privately their thoughts not only on Dorhauer's candidacy, but the search process itself.

The board took time to fully discuss the issue of diversity in the search process, as some members asked how people of diverse backgrounds were encouraged to be part of the search process. In the end, the board affirmed that its decision follows a commitment to maintain diversity among the national officers.

The search committee reviewed 13 qualified applicants who submitted their credentials and the committee itself was a diverse group in both its ethnicity and gender, with half of the members being people of color and just less than half being female.

"We had a diverse pool of applicants. We had people from African American and Asian backgrounds, women and LGBT persons," said the Rev. Bernard Wilson, who chairs the board and co-chairs the GMP search committee. "If we didn't have that diversity, the search committee was prepared to extend the deadline for applicants to submit their profiles."

Dorhauer was selected as the committee's candidate on Feb. 13. He served as associate conference minister in the Missouri Mid-South Conference for five years prior to being called to the Southwest Conference and has served churches in rural Missouri. Dorhauer has a Master of Divinity degree from Eden Theological Seminary and a Doctor of Ministry degree from United Theological Seminary, where he studied white privilege and its effects on the church.

"We know we want someone who is pastoral," said the Rev. M. Linda Jaramillo, who represented the national officers on the search committee. "We want someone to preach the prophetic word, someone passionate who loves the United Church of Christ, and someone who dreams of the future, discerns the future and hopes for anew. John Dorhauer is all of these."