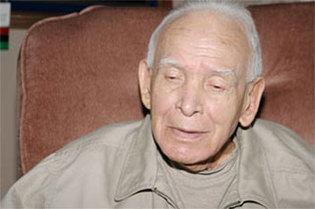 The Rev. Edwin R. "Doc" Edmonds, one of the UCC's stalwart justice advocates, died on Nov. 6 of pneumonia-related complications. He was 90.

Edmonds, a former chair of the UCC's Commission for Racial Justice, was the retired pastor of Dixwell Avenue Congregational UCC in New Haven, Conn., where he served for 35 years. A columnist for the New Haven Register referred to Edmonds as "New Haven's premier civil-rights figure of the mid-20th century."

The Rev. John H. Thomas, the UCC's general minister and president, said it was appropriate that Edmonds' death would come just after the UCC was concluding its 50th anniversary on All Saints Sunday.

"Few have had such a long and profound influence on the shaping of our church and its vocation of public witness for racial, social and economic justice," Thomas said. "Doc's leadership over the years pushed us urgently toward greater faithfulness and helped us become the church we celebrated at our 50th anniversary celebration in Hartford."

Edmonds, who moved to New Haven in 1959, is credited with helping to build a thriving black middle class there. When the Ford Foundation gave the city $1 million to pilot anti-poverty and job-training programs, Edmonds was appointed to the original board of the project, called Community Progress, Inc.

Edmonds, who was a pastor and civil rights pioneer in Greensboro, N.C., before moving to Connecticut, met the Rev. Martin Luther King, Jr. in 1958 at an NAACP convention in Detroit and the two corresponded until King was slain, according to the Hartford Courant.

The Rev. Linda Jaramillo, executive minister for Justice and Witness Ministries, served on the Commission for Racial Justice under Edmond's leadership. JWM is CRJ's successor body in the UCC's national structure.

“I remember Dr. Edmonds as a 'drum major' for justice, words that I believe Dr. King would have used to describe him," Jaramillo said. "I will always treasure the way in which he taught through word and deed. The legacy of this faithful justice prophet will live on within and beyond the United Church of Christ.”

A native Texan, Edmonds attended Sam Houston College, which was co-founded by his grandfather in 1876. He later received a Bachelor of Sacred Theology from Morehouse College and a doctorate in social ethics from Boston University.

Edmonds and his late wife, Maye, had four daughters, Lynette Johnson, Karen Spellman, Cheryl Edmonds and Connecticut State Rep. Toni Walker (D-New Haven). He was a member of Church of the Redeemer UCC in New Haven.

A public memorial service will be held at 2 p.m. on Nov. 24 at Center Church UCC in New Haven.