UCC Disaster Ministries has invested close to $820k to date in Hurricane Maria recovery in Puerto Rico, including $50k just authorized for roof repair once the COVID-19 lockdown ends. From 2018 until March 2020, 542 UCC volunteers restored 121 Maria-damaged roofs and performed other repairs. Pending: repairs following #earthquakes early in 2020. No damage is reported yet from more earthquakes this week. 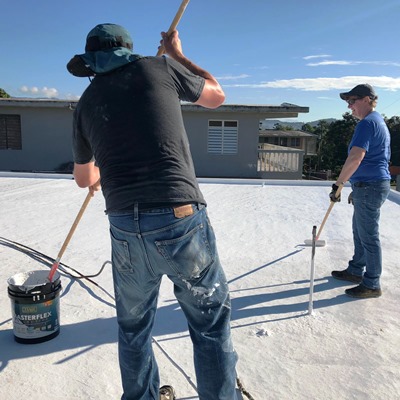 Hurricane Maria (September 2017) was the worst natural disaster on record to hit Puerto Rico. Nearly 3,000 people died – more than 60 in the hurricane and the rest from the crippling of health, power, water and other systems for months after the storm. Puerto Rico, a U.S. territory, estimated it would need $139 billion to fully recover.

UCC Disaster Ministries has invested close to $820,000 in the work to date, including another $50,000 just authorized toward repair of 10 to 15 more roofs of the more than 100 houses left on IEUPR’s waiting list, as soon as the COVID-19 lockdown ends.

“Now, two years later, we can say that we were able to fix roofs not only in Humacao but in many other towns in Puerto Rico” before the COVID-19 “lockdown” interrupted the work, said the Rev. Edward Rivera-Santiago, the IEUPR’s Pastor General.

“In total, the volunteers in our project were able to fix 121 roofs plus three churches along 17 municipalities. Our volunteers also installed doors, windows, and performed other minor reconstruction. Also, almost all of the reconstruction that was needed in Yuquiyú Camp and Conference Center was done by the volunteers as well.”

The IEUPR’s Pastor General said, “Sadly, our project has been on hold since March due to the ongoing pandemic of COVID-19. We hope that with funding from the UCC we will be able to fix at least 10 to 15 more roofs from the 100 plus houses that we have left on our waiting list. This will happen as soon as our government establishes the end of lockdown.”