The Rev. Traci Blackmon condemns the Trump-Pence administration’s decision to remove nondiscrimination protections for LGBTQ people when it comes to health care and health insurance. “A government that refuses to protect all of us protects none of us.”

Hope, grace, and justice. These three words wound throughout an historic panel discussion by four UCC women leaders in justice advocacy March 4 at the Council for Health and Human Service Ministries' Annual Gathering in Memphis. 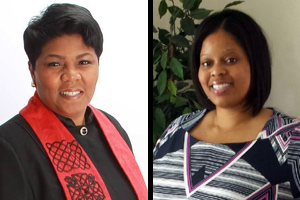 United Church of Christ leaders on Thursday (Feb. 12) expressed outrage at the perceived discriminatory treatment of a local UCC pastor by the Oklahoma State House of Representatives.

In what legislators are calling a first, one-fifth of the Oklahoma House voted Feb. 11 to strike from the record a prayer offered on the chamber floor by the Rev. Scott H. Jones, pastor of Cathedral of Hope UCC-Oklahoma City. Jones had been invited to deliver the prayer and serve as chaplain for the day by Rep. Al McAffrey, D-Oklahoma City.

Following the prayer, McAffrey asked that the session vote to include Jones' prayer in the House journal, the official daily record of the chamber. An objection was raised by Rep. John Wright, R-Broken Arrow, who called for a vote on the prayer's inclusion.

"It was a pretty chaotic moment," said Jones of the procedural points of order that ensued following Wright's objection. "My understanding was that [an objection to a prayer] never happens."

The vote took place once order had been established, with 64 representatives voting to include the prayer, 20 opposing it and 17 abstentions.

Jones is a constituent of McAffrey's Oklahoma City district. Both believe the objection was raised because of their sexuality. Jones leads the largest predominantly LGBT congregation in Oklahoma City and is himself gay. McAffrey is Oklahoma's only openly gay legislator.

"As the leader of Rev. Jones' denomination, I am deeply offended by the treatment he received from the legislature and dismayed by the message of intolerance it sends to the citizens of Oklahoma and beyond," said the Rev. John H. Thomas, General Minister and President of the UCC. "It is comforting, however, to remember that our prayers are judged at the throne of grace and not in the halls of petty principalities."

"The Oklahoman" newspaper quoted McAffrey on Wednesday, saying that "because most of Scott's congregation are gay people and Scott is gay himself, I'm sure that's the reason why there were negative votes on it."

But Wright sees it differently. In the same Oklahoman article, he stated his objection was procedural - that prayers were only entered into the official record on Thursdays - but later said his "actions were motivated by the faith."

Rep. Sally Kern, R-Oklahoma City, was among those who voted to strike the prayer from the record. Kern is on record as calling homosexuality "the biggest threat our nation has, even more so than terrorism and Islam."

The Rev. Gordon R. Epps, conference ministry coordinator for the UCC's Kansas-Oklahoma Conference, delivered a letter to Speaker of the House Rep. Chris Benge, R-Tulsa, on Thursday (Feb. 12). Epps commended Benge "for the democratic way you led the house when an unusual challenge was made to vote on whether or not to enter into the record the opening prayer given by the Rev. Scott Jones."

Responding in support of Jones, the UCC's Executive for Health and Wholeness Advocacy, the Rev. Michael Schuenemeyer, said, "Once again, bigotry infects the Oklahoma statehouse by the vote of 20 legislators to reject the prayer offered by the Rev. Scott Jones. In this mean-spirited vote, they have demonstrated profound disrespect to a gifted pastor and a congregation dedicated to faithfully serving its community through a robust and vibrant ministry."

Schuenemeyer sees the proceedings as a clear indication of discrimination. "The action of these legislators has dishonored the core American values of freedom of religion and freedom of expression," he said. "The citizens of Oklahoma and this nation deserve better and ought not to tolerate such behavior from their fellow citizens, much less their elected officials."

The United Church of Christ is a denomination of 1.2 million members in 5,600 autonomous local churches that are joined together in Christian mission through local associations, regional conferences and the biennial all-church General Synod.

At their 2005 General Synod in Atlanta, UCC delegates voted overwhelmingly in support of a resolution calling for marriage rights to be extended to same-gender couples. The resolution, In Support of Equal Marriage Rights for All, "affirms equal marriage rights for couples regardless of gender and declares that the government should not interfere with couples regardless of gender who choose to marry and share fully and equally in the rights, responsibilities and commitment of legally recognized marriage."