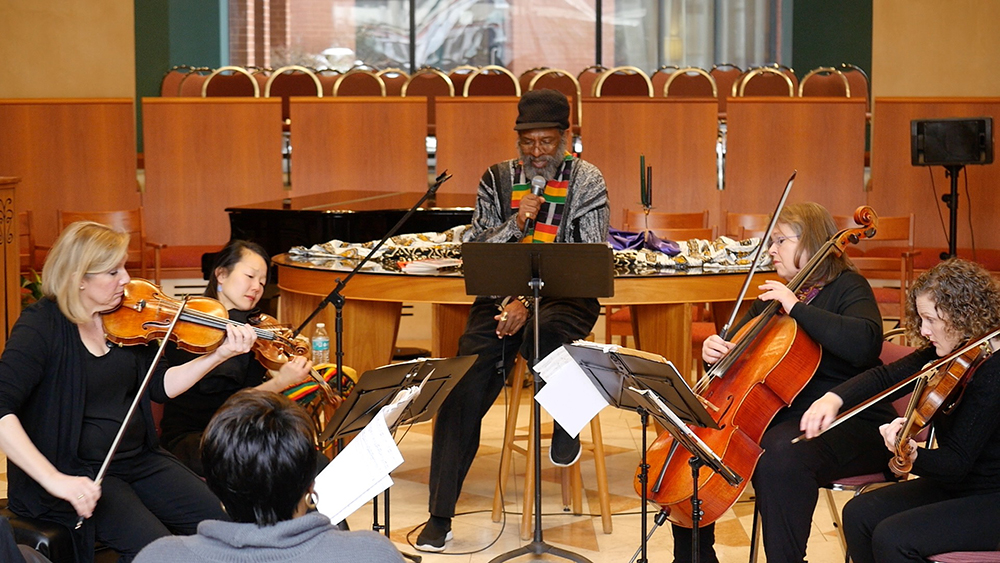 In December, Amistad Chapel UCC went to the Maltz Museum of Jewish Heritage to view "Violins of Hope," an exhibit of restored violins from the concentration camps of World War II. Two months later, I write again about violins, but these beautiful instruments came to us, in Amistad Chapel, for a special Black History Month event on Feb. 17: Collage: Music and Poetry. We listened with rapt attention to the Cavani String Quartet and poet Mwatabu Okantah through a series of pieces combining both classical and contemporary music under the poet's words of lament, protest and hope.

When Mwatabu Okantah announced the last piece, silence fell on the chapel for several moments. Then the strings of the cello began the familiar, haunting notes of "Precious Lord, take my hand…." After a few measures, the violins and the viola joined in, then the voice of the poet began speaking about Dr. Martin Luther King, Jr. It wasn't just the music and the poetry that came together in those moments; it felt like we were all together in some deeper way, even though we had come from very different places and experiences.

The notes of that cello, the way they stirred something deep in my heart, led me to consider how hard it is to explain the power of music in the life of the church. How many of us scan our memories of "thin-place" experiences in church and remember that it was music –– of one kind or another –– that led us to that closer-to-God feeling? I remember that feeling when a completely full Pilgrim Church UCC reverberated with full-throated congregational singing at the funeral of Valerie Russell, the great social justice leader of the UCC, almost 20 years ago. But I also remember that feeling when two –– just two –– women's voices, without accompaniment, sang "Abide with Me" during my father's funeral service just a few years ago, and those gathered quietly joined in.

I recently watched the Kennedy Center Honors recognizing Cicely Tyson's long and accomplished career. It told the story of her recent Broadway performance in "The Trip to Bountiful" and the way the audience would unexpectedly join in each night when her character sang "Blessed Assurance." I was fortunate to be there at one of her performances, and to join in the singing because how could anyone resist? Of course, I thought it only happened to us that one night, and what an unforgettable experience that was! You could feel the audience, gathered from many different places, many different lives, coming together to sing of the assurance of God's love and grace. I thought to myself, "This felt like church."

Sparking Ministry Conversations
When have you felt that music brought you closer to God?

About the Author
TThe Rev. Kathryn Matthews, dean of Amistad Chapel, loves the irresistible feeling of singing along in church.