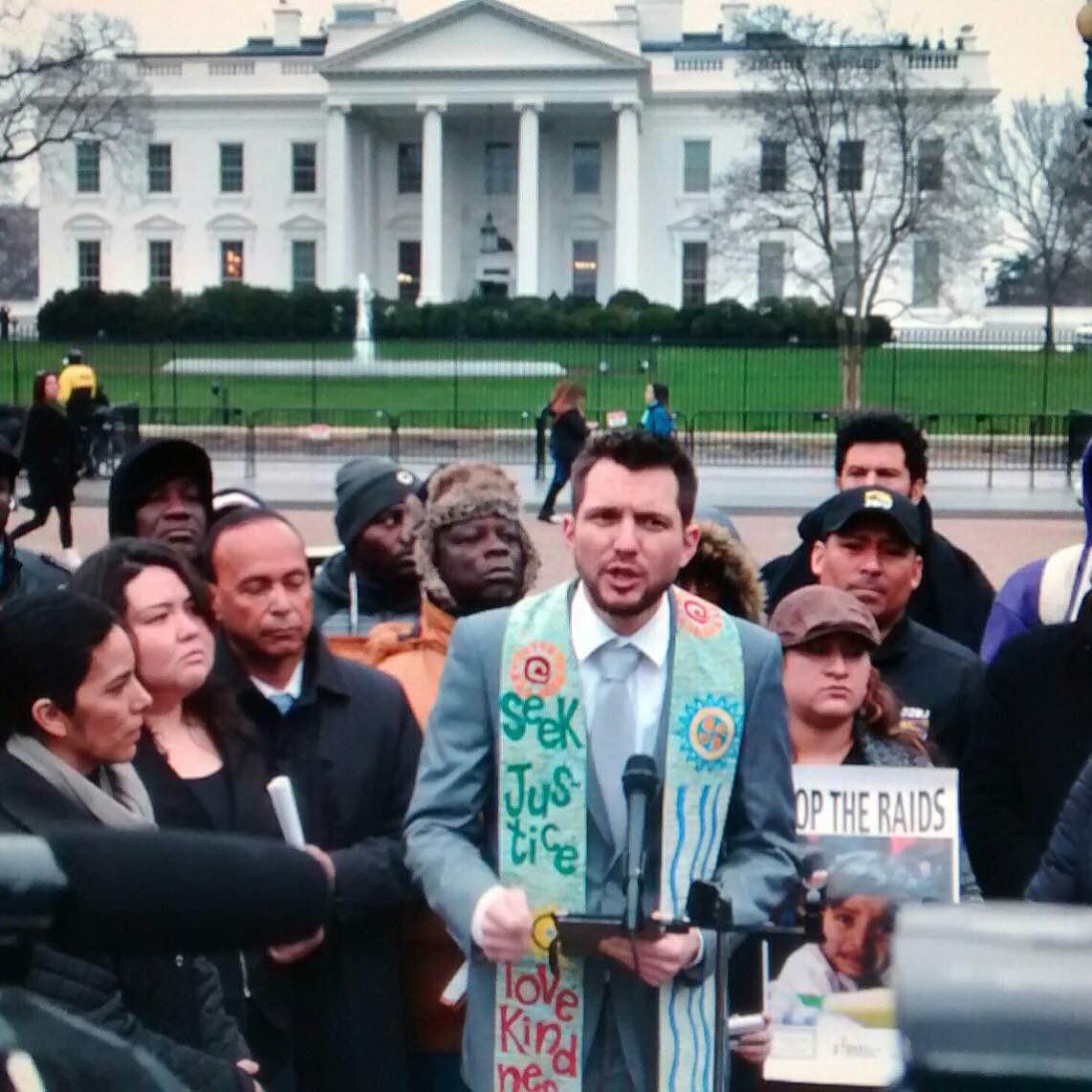 Many UCC congregations have been involved over the years in the Sanctuary Movement to help stop deportations and keep families together. This movement gained recognition in the 1980s, for saving thousands of Central Americans who were fleeing civil war that the U.S. government helped create. The School of Americas is a U.S. military training facility historically dubbed the “School of Assassins” for its role in creating death squads that killed thousands of innocent people in Latin America. This was the root cause that spurred a network of five hundred congregations around the country to create an underground railroad to help thousands of undocumented immigrants, who should have been recognized as political asylees.

The School of Americas Watch (SOAW) was formed after six Jesuit priests, their co-worker and her teenage daughter were massacred in El Salvador by the military in 1990. A growing movement formed to shut down the School of Americas (later their name changed to the Western Hemisphere Institute for Security Cooperation or WHINSEC).

This year, for the first time, the SOAW has moved their annual protest and civil disobedience from the home of WHINSEC in Fort Benning, Georgia to the U.S.-Mexico border, a space of continued border militarization. More than five hundred migrants die each year on the border and the Border Patrol’s extrajudicial killings of migrants, even on the other side of the border, has become commonplace. Such was the case of 16 year old unarmed José Antonio Elena Rodríguez who was shot ten times in the back on October 10th, 2012. A recent report by an independent task force found that Border Patrol has done little to curb the excessive use of force that has resulted in 50 killings.

Hundreds of advocates for peace, justice and immigrants’ rights are descending on the U.S.- Mexico border this week to participate in the School of Americas Watch Border Convergence. The event will offer a prophetic witness for the need to address the root causes of migration, extreme violence in Central America, the militarization of border, and the problem of and unjust U.S. immigration system that continues to separate families.

Congregations attending include Wellington UCC in Chicago, renowned for their of role in the 1980s Sanctuary Movement and beyond, have been part of the annual protest in Fort Benning. This week they will will be joining congregations like Good Shepherd UCC of Sahuarita, which has started a Samaritan ministry providing humanitarian aid in the desert to migrants, and Shadow Rock UCC of Phoenix, which has been deeply engaged in the current iteration of the Sanctuary Movement, helping stop the deportations of 3 individuals since 2014.

Our own UCC  General Minister and President, Rev. Dr. John Dorhauer, will join representatives from twenty UCC congregations and six conferences as together we march, pray and offer a prophetic witness on both sides of the border as call for humane and just policies in Central America, on the Border and within our own immigration system.

The call for increased militarization of the border has become a rhetorical space that defines a xenophobic ideology of rejection of those in need. As people of faith, we are showing up at the border to pray and act for justice, and to offer a bold and prophetic voice as the United Church of Christ. We are a denomination ready to build bridges, not walls. We have an ethical responsibility to call out the injustices that our own government propagates on vulnerable populations who are fleeing extreme violence, persecution and poverty. We must remind ourselves and the general public that God’s love knows no borders.

Rev. Noel Andersen is a minister and immigration organizer for the United Church of Christ and Church World Service.