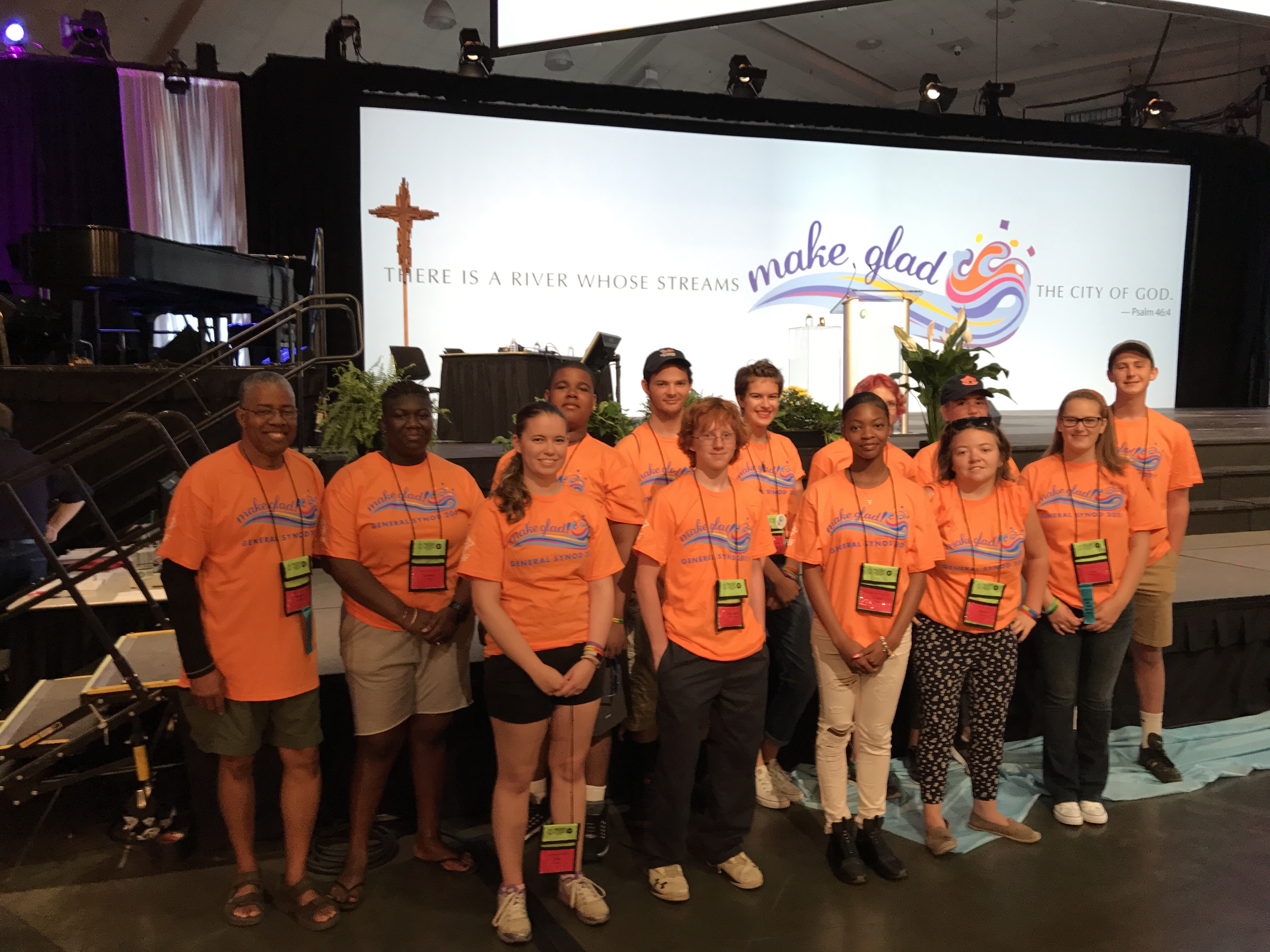 The delegates at the United Church of Christ General Synod had a good number of resolutions to deliberate in Baltimore last week — 17, condensed to 15 that were considered for a vote — and a group of thirteen people from the host conference helped ensure the process ran smoothly.

Eleven youth stewards and two supervising chaperones from the Central Atlantic Conference worked with the General Synod delegates, administrators, moderators and parliamentarians. They were all recommended for the honor, nominated by their home churches, and had to apply for their positions and explain why they wanted to do the job.

"Being a youth steward is more than I was expecting," said 14-year-old Hannah Eastman, who attends the United Church of Christ of Annapolis, Centreville, Md. "It's been an amazing yet intense experience that I wouldn't change for the world."

The young people juggled a number of responsibilities. Several of them were stationed on the floor, to hold up numbers at the microphones that notified the moderators that a delegate wanted to speak. Another steward helped the parliamentarian by running amendments up to the moderator. There was a steward who worked for the moderators and did what was needed for Rev. Sue Artt and Norman Williams. Two other stewards took the information about the delegates at the microphones to both the press and the recorders. The final steward worked with stage management and did what they could to assist behind the scenes. 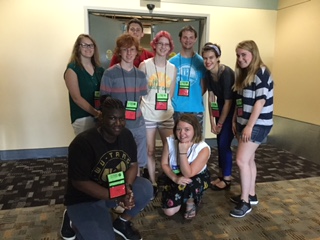 "The intensity can be a little much as you're getting the hang of things, but once you know what to do, you feel really accomplished about the work you're doing that allows Synod to happen! I'm really grateful to have had the opportunity to work alongside Libby Tigner (Moderator of the 2013 General Synod). She has been incredibly kind and encouraging, and makes me feel like I really matter and am making a difference," said 14-year-old Abby Martinage, Rock Spring UCC, Arlington, Va. "This has been a life-changing experience for me, and I'm not ready for it to end so soon!"

"My duties included standing at the microphone and taking names, contact information, conference title, and microphone number, to hand it over to the recorders — as well as giving instructions to speakers and raising a large number 2 sign to signal moderators during discussions," said 17-year-old Natalie Sturm, of Zion Evangelical Lutheran United Church of Christ in Baltimore. "The people I have met and the things I have learned have made Synod a memorable experience and I look forward to future UCC events to expand my faith to a larger horizon."

"Our jobs have been easy at times and difficult at others. During the first two plenaries, we did not have any duties," said Will Wilt, 16, Emmanuel (Baust) United Church of Christ, Westminster, Md. "During three and four, however, we were on our feet any time there was business to discuss. Listening to conversations between delegates, sitting in on intensives, committee meetings, and workshops was an eye opening experience. The issues in our world today are greater than any of us realized. Prior to Synod, I was completely unaware of the Palestinian children living under Israeli occupation. Being invited to these sessions was an amazing opportunity. I hope that at some point I can return as a delegate, so it's possible for me to be involved with the decision-making process. I have had a wonderful time and wouldn't have wanted to spend my week any differently (besides the freezing temperatures and the late nights in the youth hall)."

So would Chris McCartney, 14, a member of Christ Reformed Church UCC, Harper's Ferry, West Va. "This has been a fun experience. I would love to do this again."

Jenna Popham, 16, who goes by Nate, of Montclair First Congregational Church in Bloomfield, N.J. liked the interaction. "Being a youth steward is so fun and everyone is really nice. It's a great experience with great people."

Kadiatu Turay, Plymouth Congregational UCC, Washington, D.C., enjoyed the job, which was taxing at times.  The 16-year-old said, "I just wanted to say that being a youth steward is fun but hard and tiring."

Catie Sexton, 21, from Evangelical Reformed UCC, Frederick, Md., with previous Synod experience, was one of two chaperones for the Youth Stewards. The team reported to her and to Enrique Cobham, a member at Faith UCC in Washington, D.C.

"This is my first Synod and first time being a chaperone in a UCC non-local church activity," Cobham said. "It has been a blessed experience to work with these young people. They have taken their responsibility seriously and with grace. They are to be commended."

Sexton helped the Local Arrangements Committee select this year's team, which she said represented the diversity of the United Church of Christ. The Committee wanted to name at least two young people to represent each of the CAC's five Associations.

"While working with the youth I was impressed with their dedication to the job at hand," Sexton said. "They all had positive attitudes and were willing to do anything that needed to be done while on the floor. Not only were the youth stewards doing their jobs — but they were able to participate in many of the Youth @ Synod events. Many stewards also were able to speak to resolutions that the youth spoke to. I am extremely proud of what the stewards were able to accomplish. Getting to be their chaperone was an honor and a privilege."

"It has been an incredible opportunity these past few days to be able to see my church change to adapt to the evolving world," said Sturm. "I feel privileged to say I was a youth steward and was given a chance to offer my assistance to such an important event for the United Church of Christ. Synod allowed me to meet youth, delegates, ministers, and other UCC members from around the country and connect with people I never would have met if it weren't for my church family and community."